It was raining when we left so our guesthouse kindly provided a tricycle to take us to the bus. The driver even stowed our bags in the bus “basement” for us. The ride wasn’t bad, as far as buses go and we even managed to get some sleep. Upon arrival in Manila at 4:30 am, the uber app didn’t want to work so we settled on a cab. We likely paid too much but got to the airport in one piece where we waited for our 2:30 flight to Palawan. A man pointed us to a van and other travellers joined us. He drove all over town dropping everyone off and we were last. He pointed “go that way over the bridge”. Interesting. The “bridge” is a rickety wooden path on stilts that winds through a swamp. There are houses and stores on stilts along the way and our hostel was at the end. The room turned out to be nice and clean and our hostess very friendly. We went to town with our laundry, found a place that we hoped we could find it back again and went for dinner. By the time we got back it was dark and it was a REAL treat finding our “home” back again.

Wandering around the villages in the area is interesting and apparently bizarre to the locals as we were constantly offered rides. We happened upon a group of kids who had created their own pool table. A piece of thin wood with holes cut out of the corners and moulding around the edge. The pool “balls” were coloured plastic pieces and they had a nice round stick for a cue. They were doing great!

Coron Island, Lake Barracuda on the other side. Boats all preparing lunch

Steps going down to Barracuda Lake on Coron Island

The next 4 days were spent with a great crew visiting various islands on the way from Coron to El Nido in the South China Sea on a bangka with 8 guests and 5 crew members. Rom, our cook was amazing and prepared a feast for every meal on her two burner stove in the back of the boat, often while rocking like crazy.

We set out early on the first day to battle the wind and waves on the open sea. The captain was obviously struggling and did a great job but most of us ended up soaked anyway. At one point the motor overheated and the crew scrambled to pour water in various orifices. It took three men to pull start the engine.

Our first stop was Barracuda Lake which involved swimming to shore, and scrambling up makeshift ladders and steps and down the other side. I jumped in and was shocked at the warmth! There wasn’t much to see but a few shrimp but it was a nice swim.

A few snorkeling stops and a deserted island, coffee, fried bananas and lots of magnificent views and we stopped for the night. The wind was raging so no fire but we played a game called Mollky that one of the guests brought. Tents were set up inside huts to get away from the wind.

We set out early the next day but after 20 minutes of battling the sea, the captain decided to turn around. It ended up being very smart as even the ferry from Coron to El Nido had been cancelled and they learned that 3 fishermen had been lost.

The current was strong but I decided to snorkel anyway. I started at the top of the island and floated down stream, over and over. At one point I realised Barak had been watching me and didn’t know where I was so I hollered at him from the boat, which is where I ended up at one point. I reassured him that I was doing my best to stay safe 😉 The crew spent the day making various repairs to the boat

A family living on the island invited us to join them singing karaoke. Apparently that’s a Pilippina thing. The family is used to hosting stranded travellers as it happens often there. It was great fun being in their home where there was something cooking in the kitchen, they had a small store, a chicken ran around and kids did what they want. We took turns singing very loudly with a machine with terrible sound. FUN!

The wind died in the night so we tried to set off at 6 am and recover some lost time. Nope. One of the anchor lines had been cut by choral so that required attention. When we finally set off the seas were MUCH nicer, with just rolling waves.

Day 3 involved a cliff diving stop and several snorkelling stops, each one better than the last. We basically spent the day wet. Our stop for the night at Buhay Isla base camp was a delightful surprise. We each got our own hut with a mattress and mosquito net. The grounds were nicely raked. The “shower” had lots of fresh water and the semi squat toilet clean. We enjoyed another evening in paradise with a magnificent meal, socialising and playing games.

After all the adventures of the previous days, the last day was uneventful. More snorkeling. More beautiful scenery. More delicious meals. I could get used to this but all things must come to an end.

If you ever visit Palawan, make sure to look up Buhay Isla. They’re absolutely fantastic!

Typical deserted island on the way 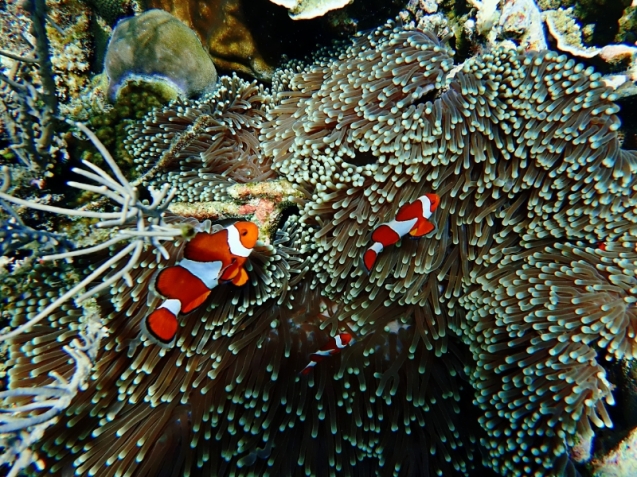 The next day we explored El Nido then took a tricycle to Los Cabanos beach where we walked a lot. Lunch was ridiculously expensive and not very good. We got the tricycle to drop us off at the beach in El Nido where we found the street lined with an assortment of fish and a couple of barbecues. You choose your fish, they cook it for you and bring it to a table set up on the sand with some veggies and rice. YUM! Dinner while watching the sunset over the bay. Nice!

We also found a place that refills water bottles (on the walking street next to the beach) which makes me VERY happy as I HATE all this plastic being discarded.

Buhay Isla offered us a free day tour as they felt badly that we couldn’t see all the places they wanted to take us on our four day trip so one day we took them up on it and did the “lagoon tour”. There were more than 20 people on a boat smaller than the one that took the 8 of us from Coron. We saw lots but it felt SO touristy after our experience with Buhay Isla. There were several other boats at each of the 5 stops too. So, if you’re going to Palawan and really want to see it and not just like a tourist, do the multi day boat trip between El Nido and Coron. 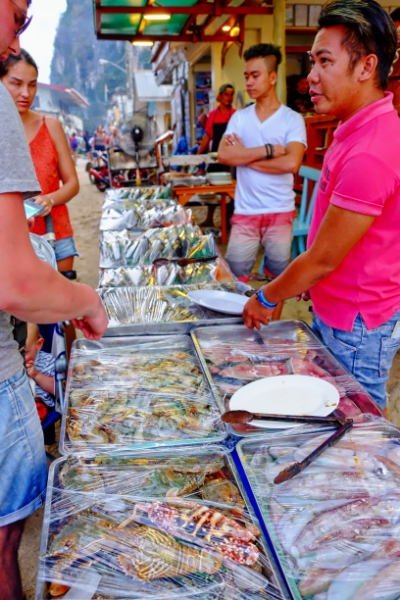 Barbecue on the street 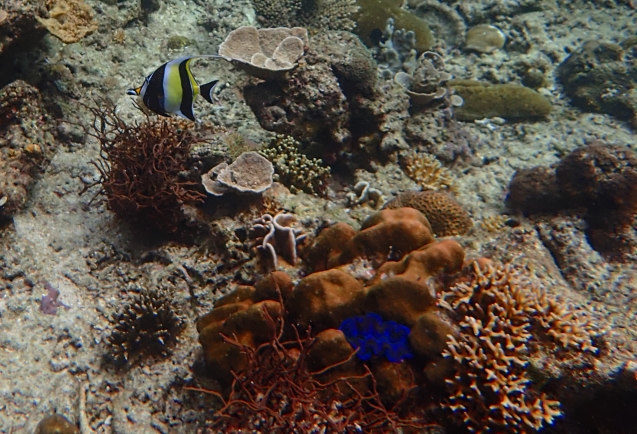 Angel fish and a giant clam

It’s a 5-6 hour trip via van to Puerto Princesa and we opted to do it in daylight to enjoy the views. It was a good choice. The scenery is beautiful with rice paddies becoming coconut groves and banana plantations along the way. We passed through several villages, saw people enjoying Sunday activities and some with carabao plowing fields. I couldn’t look out the front windshield though. It was like the amazing race or something. I know he does the trip every day but the speed…..NUTS for this “stick to the speed limit (that doesn’t exist here) Canadian. The hair pin turns, honking at people and animals to get out of the way, dodging rock piles, construction zones, narrowly missing oncoming traffic along the way drove me to an anxiety attack if I watched so side window viewing only for me.

We arrived in Puerto Princesa safely after a couple of stops and our driver kindly left us at the Teofila Pension. Him relaxed and ready to be done for the day and us, glad to be here in one piece. 🙂

We took a city tour that visited all the highlights, walked all over the place and one night had dinner on the Bay walk. We ordered dinner for two and the lady spread banana leaves on the table, then put all our food on it. Definitely an interesting way to eat and it was really good!

Puerto Princesa has a really good vibe. People are incredibly friendly and helpful. Children often stopped us and asked our names, told us theirs and asked where we were going. Once a couple of teen aged boys on the street asked our names, shook our hands and welcomed us. Policemen took the time to chat and one told us a few things we should see while we’re here. A lady was singing outside her home and when we acknowledged her and danced by, she invited us to join them for karaoke. IT’s not just a rumour. Pilippinas love their karaoke! 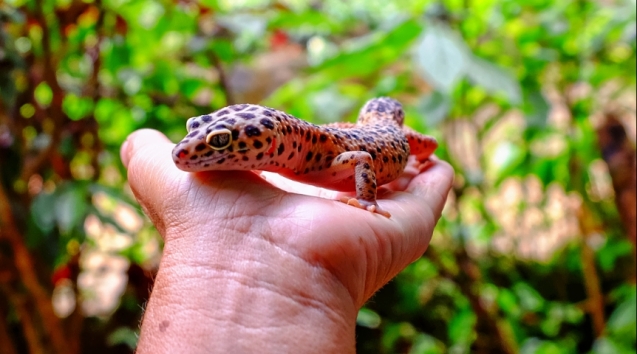 Our dinner on the baywalk. A little bit of everything!

View along the baywalk