JAPAN!!  Much as I want to go everywhere, Japan was never on the top of my list.  I just thought of it as “CITIES” and I’m not much of a city fan.  However,  I can’t resist a cheap flight so when the opportunity came I jumped on it.  To optimise the long distance I planned 5 weeks, figuring if there’s not enough in Japan to keep me busy, South Korea’s not that far.  Well.  Apparently in 5 weeks you can barely scratch the surface.  I was overwhelmed by the variety and choices of transportation so Sue and I decided on a self guided tour to start and get our “feet wet” in Japanese culture.  I highly recommend Inside Japan Tours.  We enjoyed a bit more luxury than we’re used to but were glad we did as without that, we would have missed out on some amazing experiences.

Just ask me about it if you’d like to learn more about the self guided tour option.

We arrived in Tokyo on October 30th and spent a few days there. 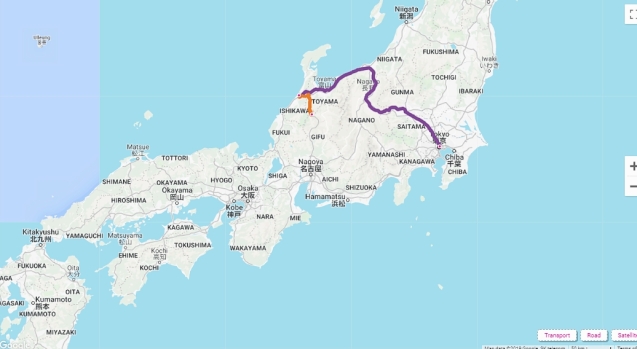 After a leisurely breakfast we packed up, checked out and headed to the train station way too early but afraid of getting lost and missing our train. We followed the directions in our Japan “Bible” as created by Amy at Inside Japan tours. The Ginza line to Ueno and then connect to the JR line went smoothly. We asked at an information booth to be sure as the station is large (to us!) and there are a lot of trains. We wandered for a bit, then sat and waited for 1/2 hour till our train bound for Kanazawa arrived at 10:33. It departed at 10:38. Right on time 😀

Even at 200 km per hour there’s lots to see. The trees were just starting to show their autumn colours.as the landscape changed from city to farms, towns and mountains.

After checking into the Daiwa hotel, we went walking through the Omi-cho market and to the Kanazawa castle and gardens. We spent a few hours there as the place is huge. By then we were starving and found a place nearby that served ramen. We raced back to the castle to see the light show over the garden which was different and really nice. By the time we walked back to the hotel our beds were calling us.

Breakfast at the Daiwa Roynet is excellent and kept us full most of the day. We got a day pass on the loop bus and did the whole thing before deciding where to get off. A walk along the river was nice and included a sign language conversation with a man trying to photograph a heron then a bit later, a man feeding ducks. Back on the bus we alighted at the Kenrokuen gardens. 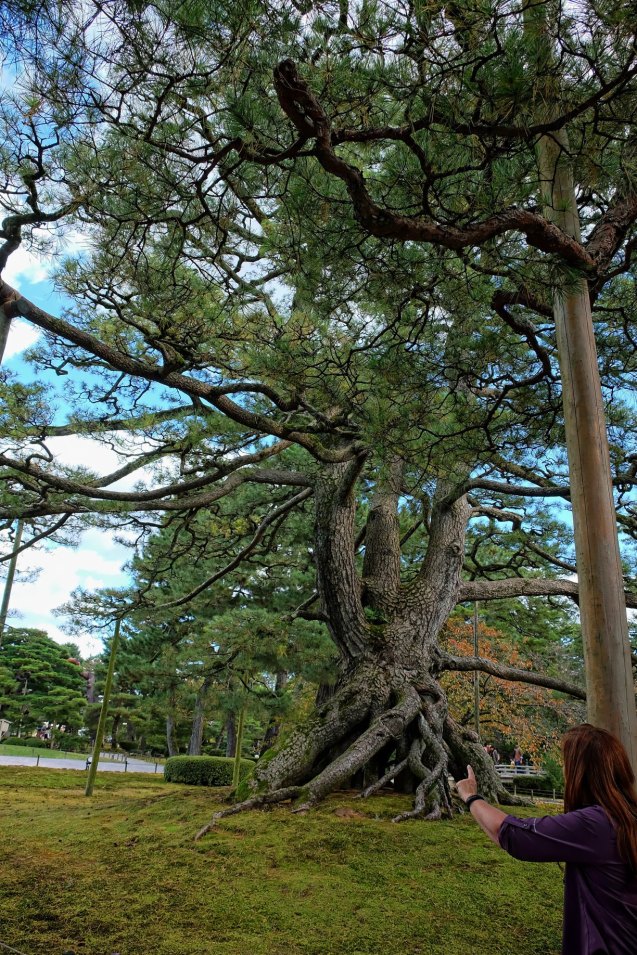 Massive old tree. Branches are propped up rather than trimmed 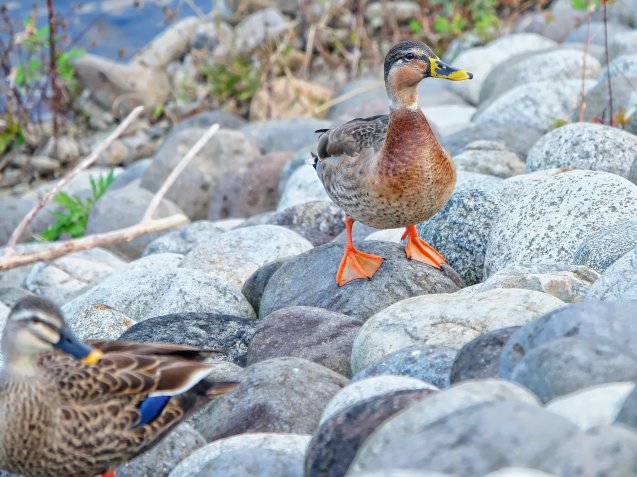 A few more hours were spent there before we headed back to the train station.

There we found the Mori Mori sushi restaurant which had a huge line up waiting to get in. A nice lady showed us how to take a number and we went and sat with the rest. Of course they were calling numbers in Japanese. Hmmm. A young man next to us didn’t speak English but he used his phone to show us the number they had just called. Between him and the lady on the other side waiting for our number as well as their own, we knew we wouldn’t miss our turn.

The wait was worth it. After seating us at the conveyor belt, the waiter gave us a sheet of instructions in English. Perfect! No one spoke English but who needs it when sign language works and they’ve got instructions! We picked things off the belt and ordered a few from the ipad and enjoyed a wonderful assortment of sushi until we were stuffed. The bill came to about $37 CAD. Not bad!

We wandered the mall for a bit, noting the Japanese fashions of long skirts, baggy pants and over sized sweaters. Everyone dresses so nicely! We feel sloppily dressed but no one seems to notice or mind.

That was a 22,000 step day but my feet didn’t hurt as badly. Either I”m getting used to it or the walk on the grass along the river helped. 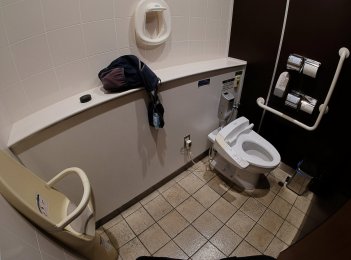 November 5. The Daiwa allowed us to store our bags there after we checked out and we set out to find the Samurai village. My phone app said we were close and I must have looked confuses as a kindly Japanese man said “Konichiwa” and pointed “Samurai house”. Nice. We walked about on our own and then noticed a small tour group whose guide was speaking English so I nonchalantly followed them. That worked until they found their bus. Then we were on our own again to wander.

School field trip. We saw lots of these. All the kids wear matching hats. Great idea 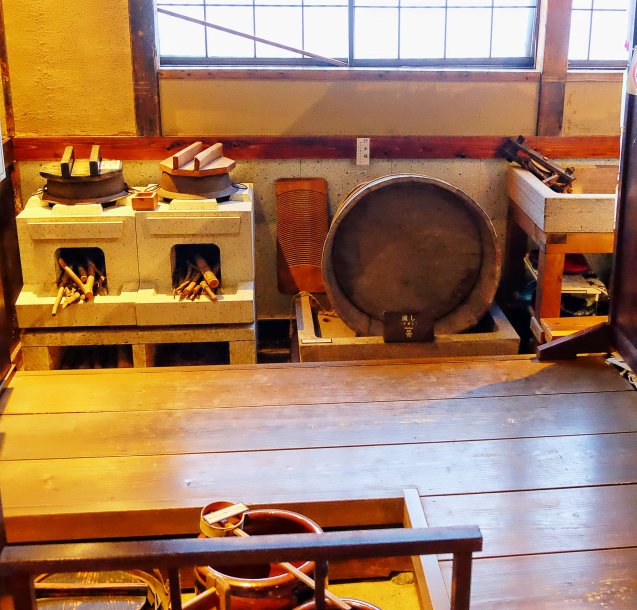 Bags back in hand we headed to the bus station where we boarded the bus to Shirakawa-go. That was one of the smoothest bus rides I’ve ever been on. The scenery changed to farm land and then we climbed up the alps, mostly through tunnels but the views when outside were spectacular.

The walk to the Wadaya Inn was straight up hill about 1.3 km. This is why we try to pack light.

A man who spoke no English greeted us warmly and we checked in. He showed us our room and gave us a map, pointing out how to walk to the village to see the Gassho-zukuri houses

We quickly dumped our bags and set off as it was already almost 3 oclock and we didn’t want to walk back in the dark. The first couple kilometres were straight up hill to the view point where you can see over the whole village. Then we walked down, down, down into the village and enjoyed looking around. The place was crawling with tourists but it was still nice and quiet and the village is beautiful.  The autumn colours were just beginning in the tops of the nearby mountains.  I couldn’t stop snapping photos!

We managed to get back to the Inn by 5 pm and had some down time before dinner. A lovely woman came and told us it was dinner time and we sat on the floor on cushions at the low table to eat the wonderful meal she had prepared. She explained what some of it was. All was delicious.

Back in our room the man had laid out our beds and later came in with a hot water bottle. That was an amazing treat that stayed hot ALL night!

2 thoughts on “Our first Shinkansen! Kanazawa and Shirakawago – a relief from the city and into the ALPS!”