The 1.5 hour flight with Air Asia was wonderful as they gave us a sandwich and a glass of juice. Yes, that IS a big thrill.

We didn’t do much the first day besides settle in and figure out our neighbourhood. The next day we were slow and missed the first bus so got an uber to the Semenggoh wild life sanctuary. We got there just in time for the first feeding and were rewarded with lots of orang utans. This place is very different from Sepilok and it’s definitely worth it to visit both. Here they have as much territory so they feed the orang utans more. They’re completely wild but are named and the feeders “call” them. When the trees are full of fruit they don’t always come as food is plentiful.

We thought we could stay in the park for the afternoon feeding but were told we had to leave after the bus had already gone so we tried to walk to town. The road is busy and it was really hot so we turned around and decided to just wait. Later a young couple joined us and we passed the time chatting about our various travels. That’s always fun.

The afternoon feeding was MUCH more exciting. There were police present (weird) and then a procession of vehicles appeared, one black with a South Korean flag on the the front. No, I didn’t know that. Hugo pointed it out. The path was opened for some security police and a man in a suit and we were told to wait. Interesting. The man apologised to us for the disruption and carried. on. Turns out he was the ambassador from South Korea. A little while later we were all allowed to enter. A lot of people left after seeing a few orang utans but we stayed. The ambassador was asking one of the keepers lots of questions so I got closer to listen. Soon I was asking questions too and learned a lot more about these fascinating creatures.

Most of the people had left when one of the rangers told us that an old female had been spotted elsewhere so we followed him and watched her for a while. Then the REAL excitement. The biggest male had been spotted! We asked the ranger if the bus would wait as a bunch of us had to catch the 3:45 as it’s the last bus of the day. He said he’d radio and ask. There were 5 of us that got together and decided we’d uber together or something but we weren’t missing this. The big guy came crashing out of the trees and we were told to back up slowly if he came our way as they couldn’t predict what path he’d take. It was worth it. What an incredible animal!

We walked the 1.5 km back to the gate, assuming we’d have to find our way back but found the public bus WAITING for us! He held it a full half hour! The people on it didn’t even complain. Apparently a sighting of Richie, the big orang utan is worth holding a bus in Kuching.

The bus stopped at the station and Sue and I realised we had no idea how to get to our hostel. You’d think we’d learn. Luckily Frankie and Hugo knew where it is as their’s is close so we walked with them. Nice! We all treated ourselves to ice cream at the 7/11. We deserved it. 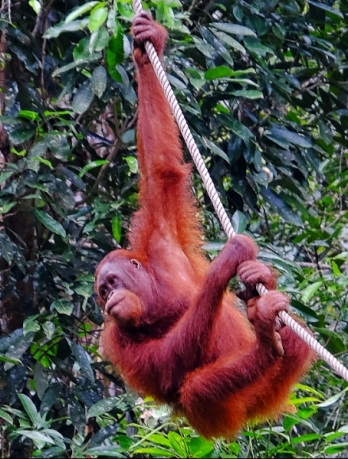 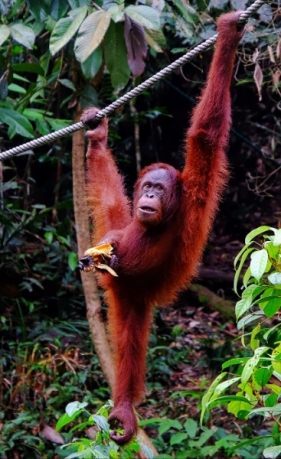 Our host’s son David showed us where to catch the 8 am bus to Bako along with a couple from the Czech Republic. That took us to a dock and office area where we checked into the park and paid for a boat transfer to the Island park. We ran into Frankie and Hugo so decided to spend the day together. Once at the park we dropped off our bag (we didn’t take much) and headed for the trails. Trail #3 is supposed to be easy. It’s only 1.5 km but took us 2 hours as it involves climbing over roots and rocks and up and down ladder like steps and several stops to watch monkeys. At the beach we saw a boat so got together and hired him to take us on a bit of a tour. It was a great way to see some of the park!

After the day trippers departed we saw even more monkeys including the silver leaf monkeys and got lots of good photos while watching their antics. After dinner we joined the night hike where we saw a flying lemur, snakes, spiders and lots of other critters.

Our hostel bed wasn’t as bad as we thought it would be for $4.50 each. The room wasn’t the cleanest and the the shared bathroom not terribly pleasant either but it was just one night. The food wasn’t as bad as the reviews said it was either. The park is worth a bit of “suffering”.

In the morning we did some more hikes then spent some time near the beach just reading in a gazebo. The day before, while we were sweating like crazy trekking and looking for monkeys, others had seen silver leaf monkeys while drinking coffee in the cafe. So we thought we’d try that. It didn’t work. No silver leaf monkeys for us. Oh well. We did see LOTS the night before.

A boat ride back and we boarded the public bus, not at all sure where to get off. Frankie had told me about an ap maps.me for the phone that doesn’t use data so I tried it. Excellent! When we got within 200 metres we pushed the button for the next stop and were dropped off pretty much right in front of our hostel! Our feet will appreciate us getting lost a little less. 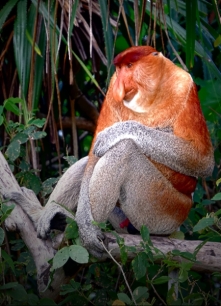 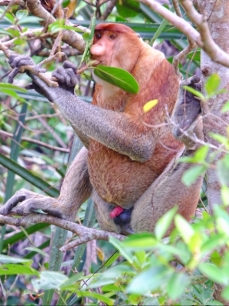 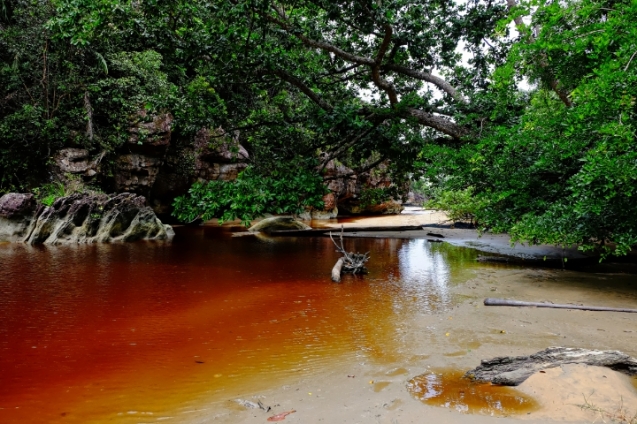 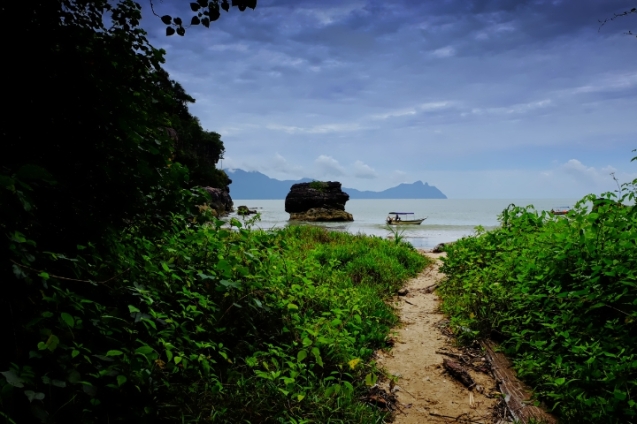 Nice view along one of the trails in Bako National Park

This is the “easy” trail

One day we were sick of the heat so looked for an activity that involved water. Kayaking it is. Sue was hesitant as we’ve been on kayaking trips before that were a little more “adventure” than we’d bargained for. Kayaking down the Semadang River turned out to be an awesome day!  The 12 km paddle was great. One stop involved a bit of a hike to a small water fall. The next was at a village for a local lunch of bamboo chicken, ferns and broad beans with fruit for dessert. A stop for a swim and at our drop off point around 3 pm. We spent the day wet again but at least it wasn’t sweat! 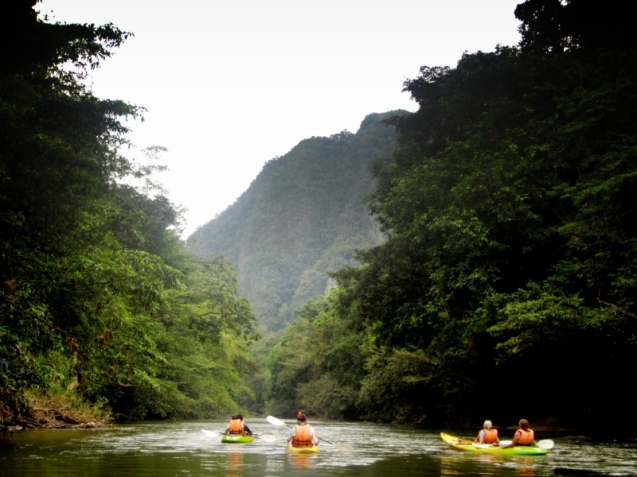 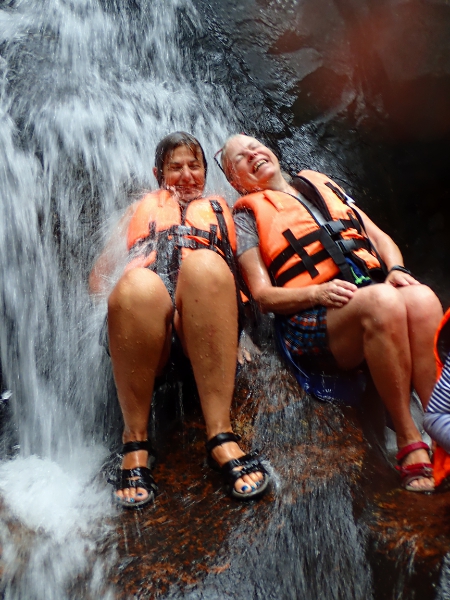 Cooling off in a water fall

Hike to the water fall 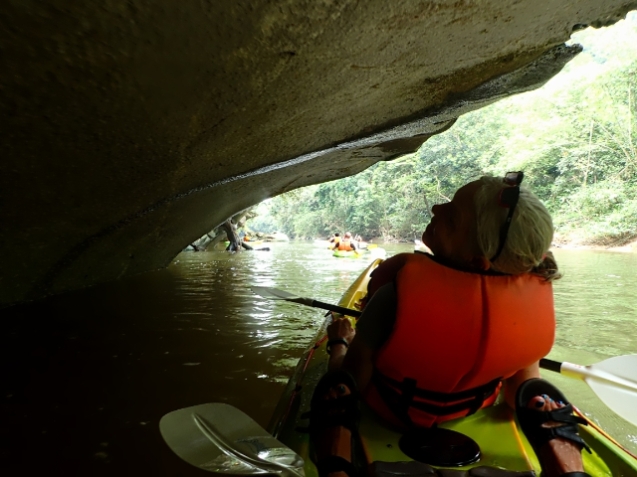 When you’re too busy looking at the scenery to steer the kayak and try to kill your friend.

We thoroughly enjoyed Kuching and were there for 6 days. You could easily find lots to do and stay longer. I highly recommend Marco Polo’s Guesthouse. Sam and Jan are amazing hosts and David keeps the place spotless!