Getting to Banaue is an adventure. Jeepneys are scheduled to leave every half hour however, they don’t leave until they’re full. It was 9:10 so we assumed we’d missed the 9 am  but there was one sitting there. It looked full. Apparently looks can be deceiving so the man threw our bags on top and we climbed in. Down the road a bit we even picked up 3 more people. One woman was half hanging out the back but we didn’t lose her so all was good.

Upon arrival in Bontoc the man passed our bags back down to us and in seconds, another man was there asking if we were going to Banaue. He then directed us to his van, told us it was leaving in 1.5 hours and was 200 pesos. So we headed off to find a bank machine. On the way back we found someone who’d take us there for less and considered it but our guy was ready to go, a half hour early and our bags were tied down. The difference was negligible so we hopped. in. The van wouldn’t start so the front seat passengers got out, he flipped the seat back, fiddled with something and it started. At one point he stopped, got a tool out from the back and tightened the nuts on one front tire. Interesting. Another time he stopped and a couple of guys looked inside and then opted to ride on top.

The road to Banaue winds up, up and around the mountains with amazing views all along the way. Once in Banaue, random folks pointed us in the right direction and we headed to our guest house. After settling in we headed to the tourist office to pay the eco fee and get the scoop on things to see. The weather looked good so we headed to the view point. Half way there it started to pour. Of course the poncho I’d had in my back pack for the last week was now in my suitcase. Not smart. Sue had hers but the mountain was socked in with fog, not much good for viewing so we went back, picking up a jug of water on the way and spent the rest of the day chatting with other travellers. That’s always fun. 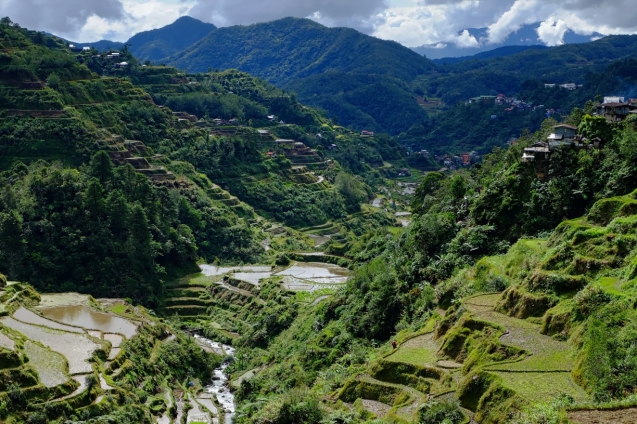 Home in the village

London Bridge is a universal game 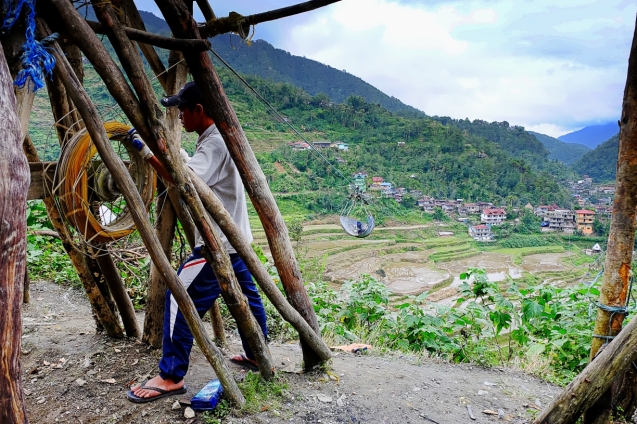 One way to get dirt from one place to another.

One day we went to the tourism office and asked for a tour to Batad. We hopped into a tricycle with our guide Lolita and drove the scenic road to Batad. At one point we had to get out as it was too steep for that many passengers. Then we happened upon a landslide that had happened moments before. Luckily no one was hurt!

The rest of the day was spent traversing the rocky paths, steep steps and rice terrace walls. After a couple of hours of this, Sue had had enough and waited at a cafe while I went the rest of the way to the Tappia waterfall. Down, down, down and then across then up and down and around and finally I reached the falls. Then came the trek back up. By the time I reached the top where Sue was waiting, I was DRIPPING with sweat, but then, so was Lolita so I guess I’m not THAT out of shape. 😉

We headed back to the village where we had some lunch and walked back to the road. Some men had cleared one lane so we could drive past the landslide.  They claimed this happens when it rains a lot so…. I guess they get a lot of landslides!  We had to get out and walk for the steep part again but this time Uphill. Fun.

While eating lunch, I had my back pack on the floor, right beside my feet.  There were kids playing everywhere so I hadn’t really paid attention. I happened to look down and there was a little girl, right beside me. I asked her what she was doing and she scampered away. The zipper on my bag was half open. Gotta watch out for those cute little pig tailed pick pockets!!

Our last day we spent wandering around the village of Banaue, Bocos, Tan Am and tried to get to Poitan but Sue didn’t like the looks of the treacherous path. It’s a good thing it rains a lot here to clean off the streets. People spit red gunk all over the place. Emaciated dogs poop everywhere. They try to keep the town clean but there’s an overall impression of dirtiness. Our luck with the weather ran out so we headed back to our guesthouse to relax with a coffee until the night bus back to Manila.

No such thing as an easy hike here 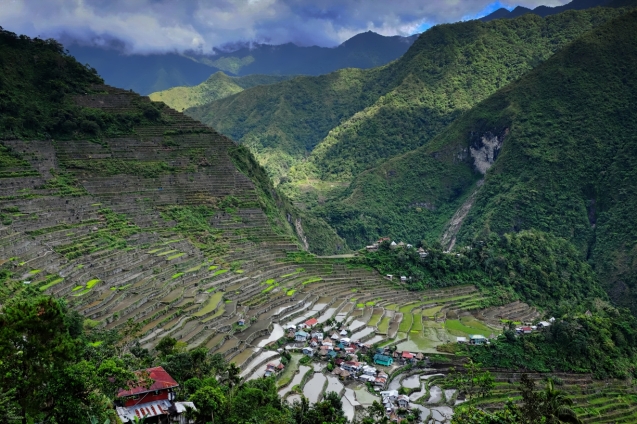 View along the road to Batad

Cleaning the weeds off the terrace wall preserves the wall and adds organic fertiliser to the rice paddy.

Just another day in Banaue

One thought on “Banaue & Batad; Trekking and hiking paradise!”