For me, the worst part about travelling are the travel days. I know. That sounds like an oxymoron doesn’t it? I really do hate the airport security, hurry up and wait, pack unpack, crap I forgot to drink the water, anxiety over whether my carry on will pass, line up to sit and wait for air planes game.

Puerto Princesa is supposed to be getting an international airport but in the meantime, getting anywhere from there is a pain. Everything goes through Manila so…..we flew to Manila, waited 4 hours and flew to Kota Kinabalu. Arrival there was complicated by a huge line up at passport control at 1:30 am. We tried to stretch out on the hard chairs and catch a nap but that’s impossible. At 6 am we boarded our flight to Sandakan. Before 8 am we arrived at our hostel, Sandakan backpackers. We were going to leave our bags and find food but they offered us breakfast! VERY kind! The rest of the day was spent getting to know the town and trying to stay awake. I love a place where calamari is the cheapest thing on the menu.

Our hosts said we didn’t need to spend the money on a city tour. He made us a map, told us what highlights to see and sent us on our way. He even lent us his umbrella. Our first stop was Sim Sim, a village on the water just outside Sandakan. It was great fun wandering the “streets” that stretch out over the ocean. People were incredibly friendly and we ended up with an entourage of children whose only English was “HELLO” and “SELFIE”. So of course we took pictures and video and showed it to them. Adults nearby laughed at their antics. A peak inside some of the homes revealed clean, spacious, living areas and many had cats or chickens in cages and lots of plants.

We walked to the old Mosque. They didn’t let us in and it didn’t look very interesting anyway. Next was Agnes Keith house. She was an American whose husband was stationed here as a conservationist in the 30’s. During her time in Borneo she wrote some books that sound really good. “Land Below the Wind” was her first The house was nothing special but the history very interesting. There’s an English tea house there too.

Next we found the Chinese temple but it too was closed. Oh well. We walked a lot. Saw a lot and talked to many people. Everyone was friendly. A few times we were asked where we’re from and welcomed to Malaysia. 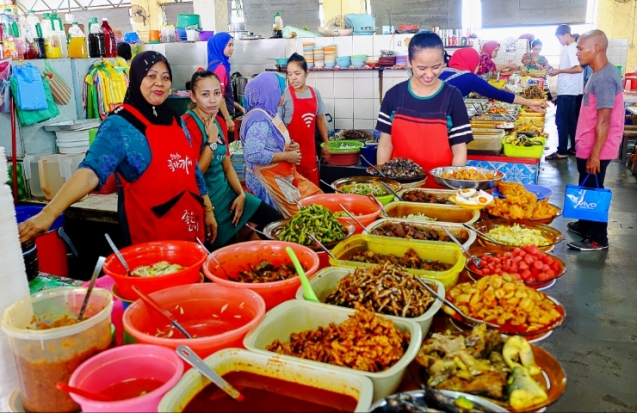 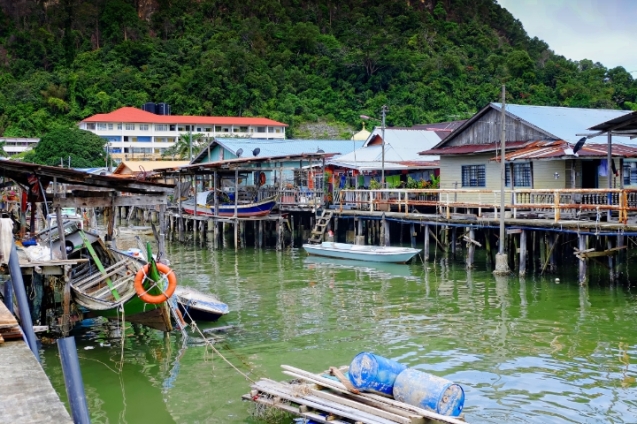 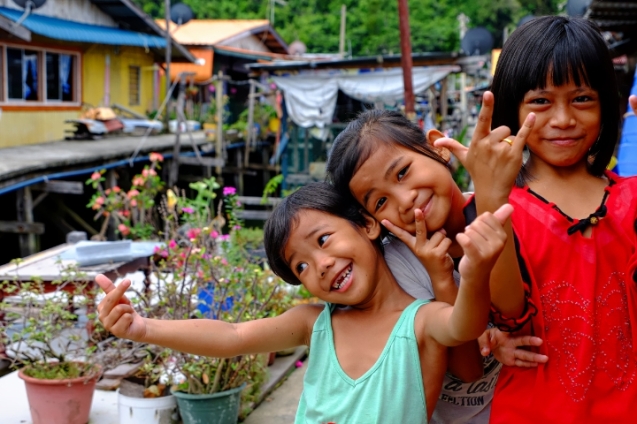 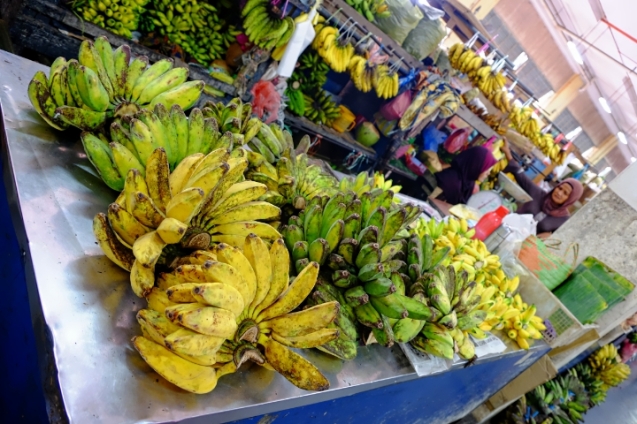 That’s a lot of different kinds of bananas! 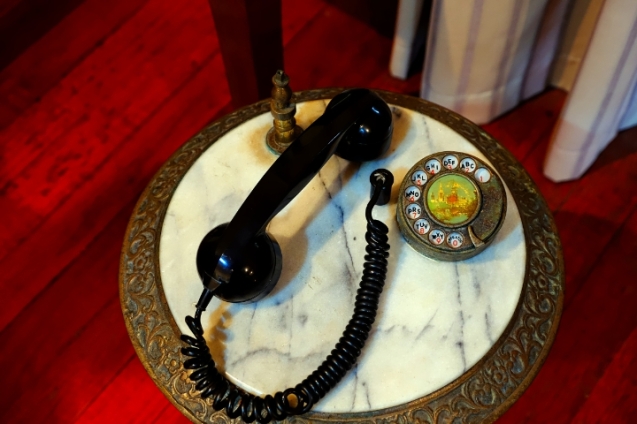 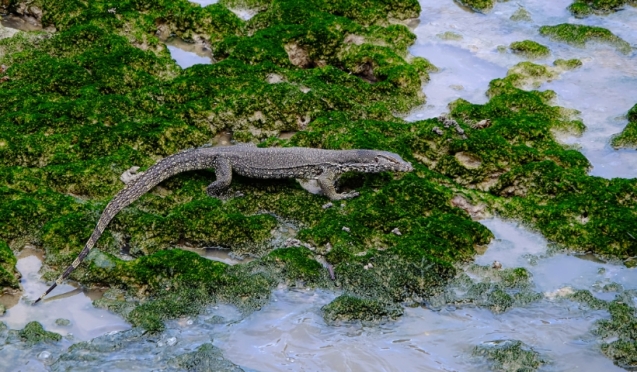 After being warmly welcomed at Uncle Tan’s Wildlife adventure base camp we set out to visit the orang utan sanctuary in Sepilok. It was kind of disappointing in that it felt more like a zoo than a natural habitat but good work IS being done there. We watched the orphaned babies playing on the jungle gym (through glass) for a while then went to watch the feeding. The adults are fed only bananas. The idea being that they get tired of the diet and try harder to fend for themselves, and therefore end up rehabilitated into the wild.

After a delicious lunch we boarded the van and rode about an hour to river where we boarded a small motor boat. The ride up the Kinabatangan river to Uncle Tan’s adventure camp took about an hour and we saw lots of wild life along the way, especially long tailed macaques.

The camp is very basic. Sleeping huts accommodate four to six people and are very open, as in no doors or windows. You get a mattress and a mosquito net. A light blanket is issued but there are no pillows. There are wooden walk ways every where as a lot of it is swampy. It’s nice as it keeps the mosquitoes to a minimum. Toilets are flushed with a bucket and “showering” is done with buckets as well. There’s electricity from 6 pm to midnight. It’s certainly authentic! The food was really good with lots of choice in vegetables and very tasty meat dishes. Our group was really great as well. We started with six of us. Alex and Andrew (British) left after the first night so the last day it was just Russel (Canadian), Bert (Swedish), Sue and I.

After settling in we set off on a jungle walk. As it got darker there were more and more things to see. Em taught us to look for reflective eyes with our flash lights (head torches) and we trudged around through mud and brush. Thankfully they rent rubber boots.

After dinner we got in the boat and headed up the Kinabatangan river and one of it’s tributaries to look for nocturnal animals. We saw too many to list them and thoroughly enjoyed a lot of monkey antics.

The next morning we were in the boat again by 6:30 am for more animal viewing. Back to the camp for breakfast then in the boat again to the protected area for a hike. That trail was MUDDY! We slipped and slid a lot and at times were ankle deep in mud. We returned to camp, hot, sweaty and mosquito bitten but altogether pleased with all we’d seen.

After lunch is siesta time. Not that we had one. I explored the grounds for a while and then some of us played cards until it was time for our evening hike. Another boat ride with more animal sightings, then a hike on a little less muddy path that was a little trickier in the dark.

On the way back it started to rain but that felt good as it’s otherwise so hot. That night it poured rain most of the night which makes a lot of noise on a tin roof. By morning the river had risen a couple of feet. Sue, Russ and I opted to go fishing so Em dug up some worms, supplied poles and off we went. I caught a rat head catfish which is the strangest fish I’ve seen. It even made weird noises.

After breakfast we packed up. Good thing we brought plastic bags as everything was wet. The damp jungle just permeates everything. Em reviewed everything we’d seen over the last three days and we came up with 65 creatures!

Back in the boat for the trip down river to meet the van that took us back to base camp where we had lunch before heading back to Sandakan. At Sandakan backpackers we were greeted like old friends. When I asked to print boarding passes, Sharif just let me use their computer. VERY nice! 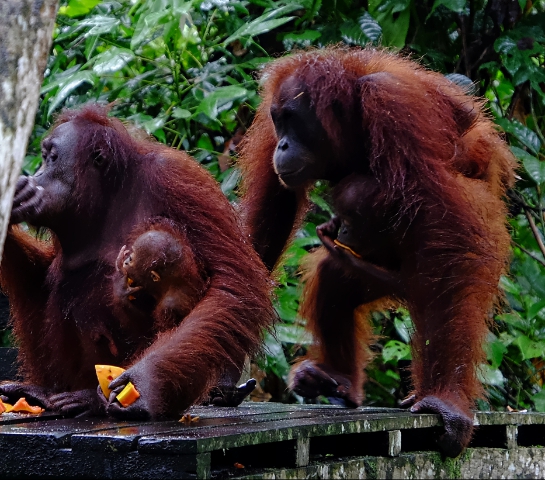 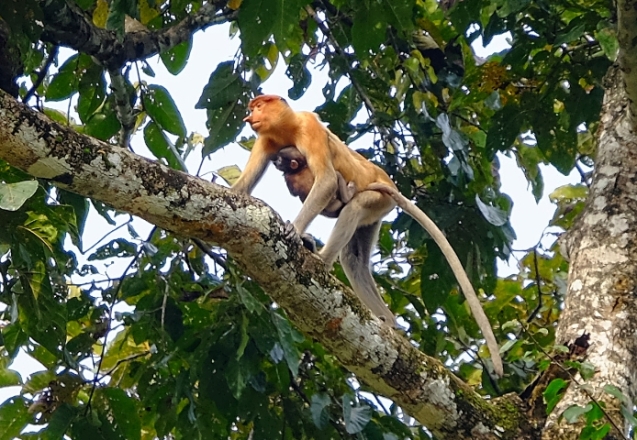 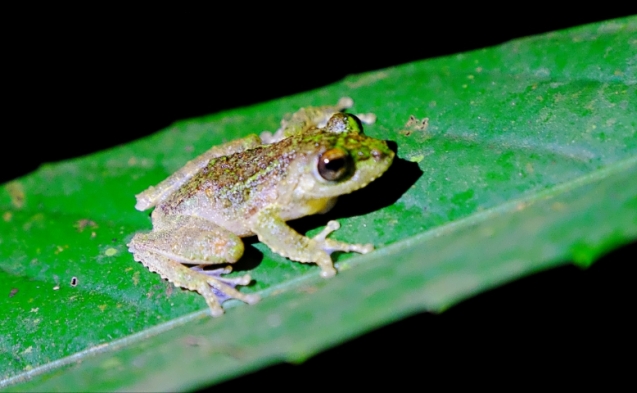 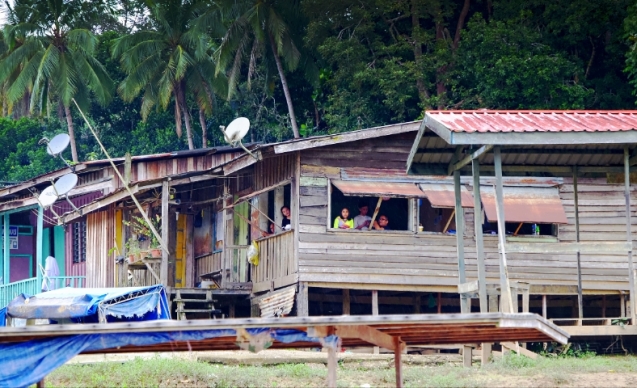 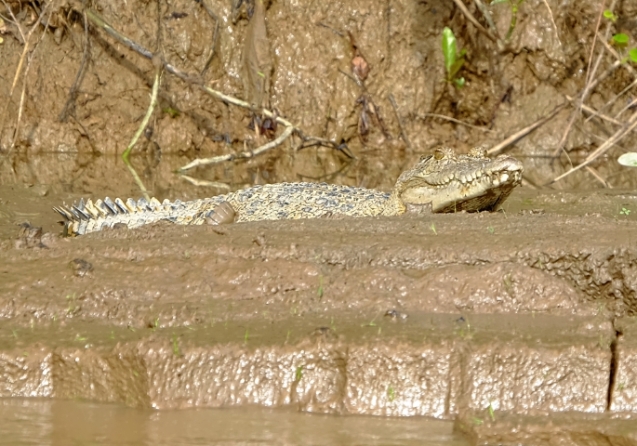 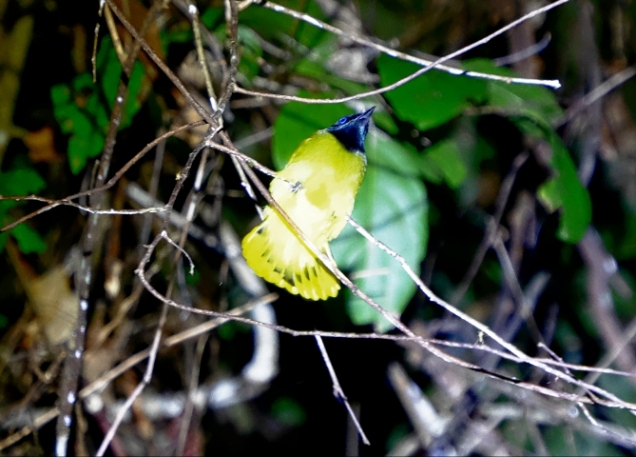 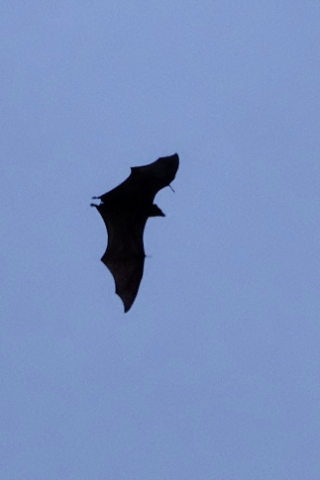 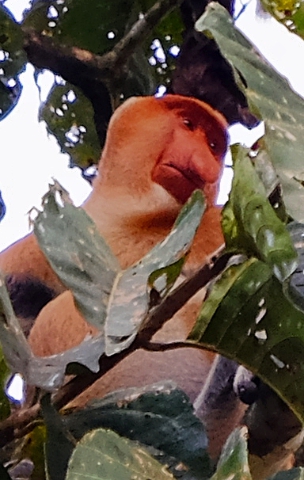 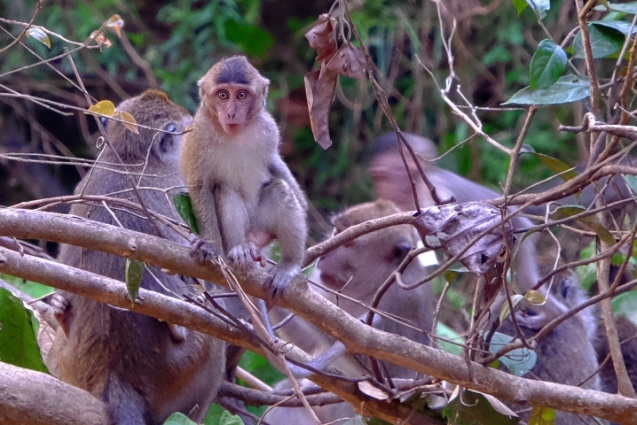 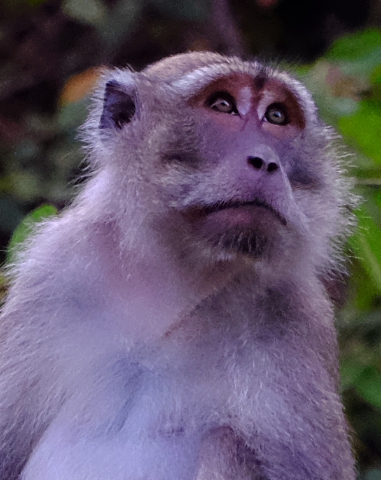 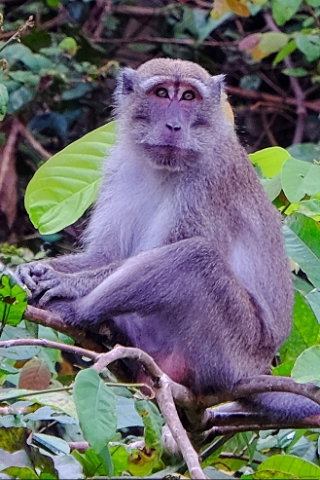 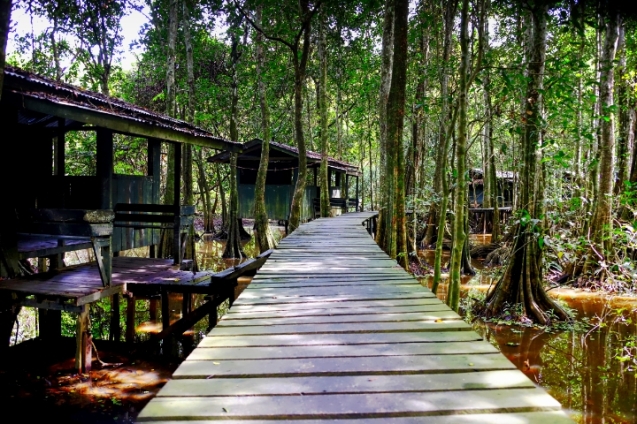 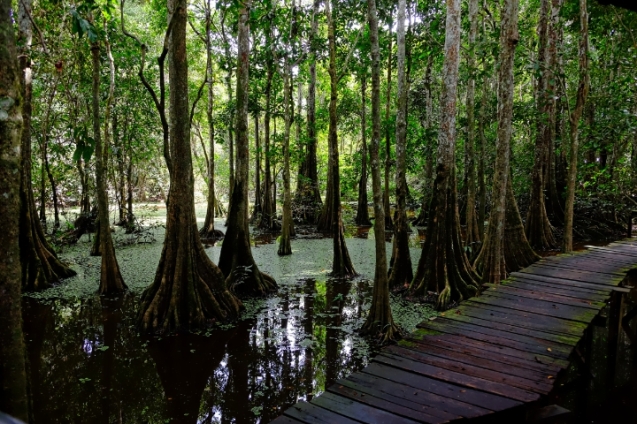 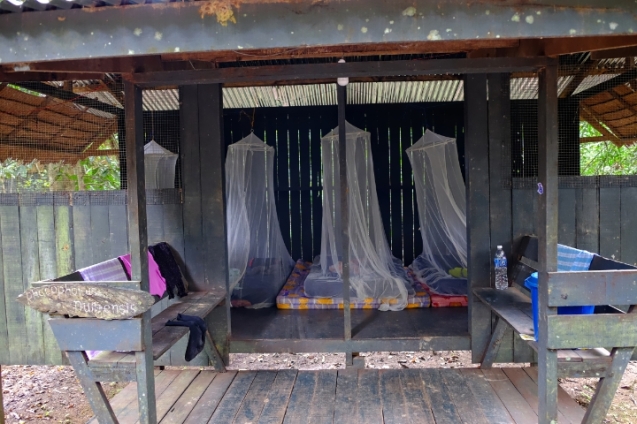 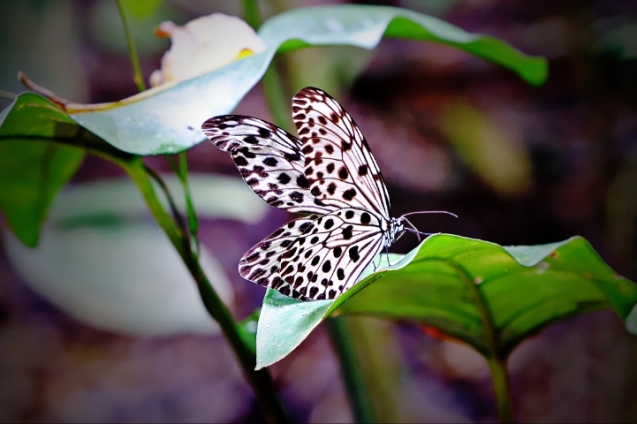 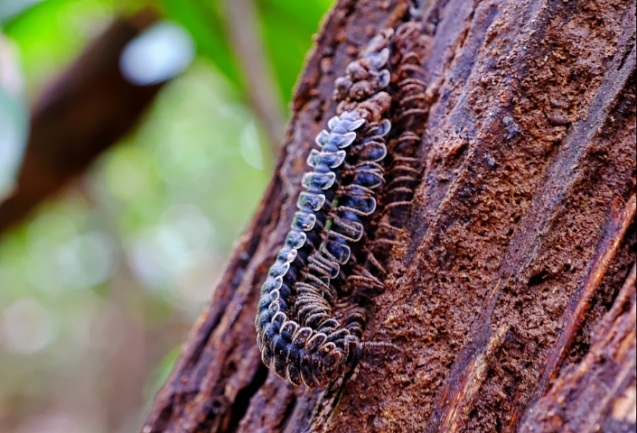 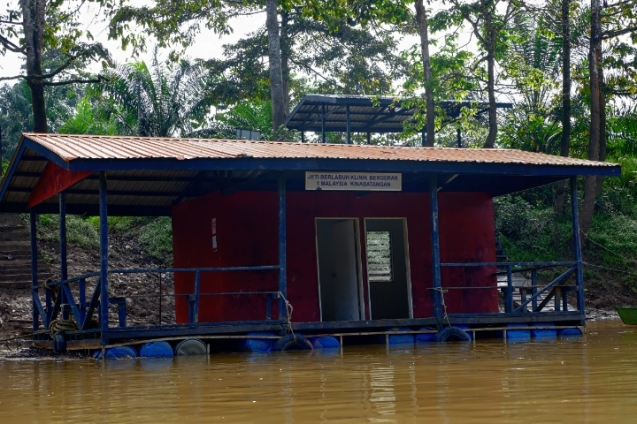 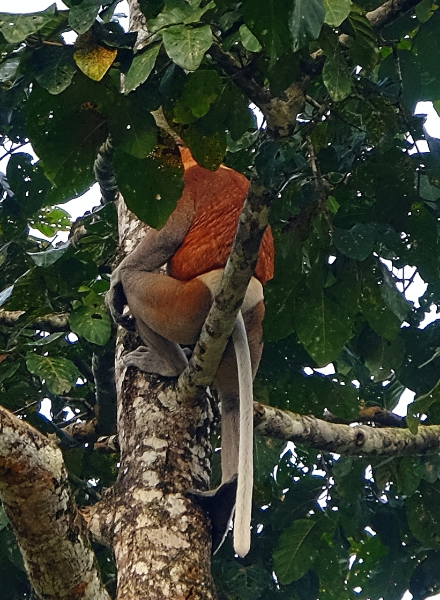 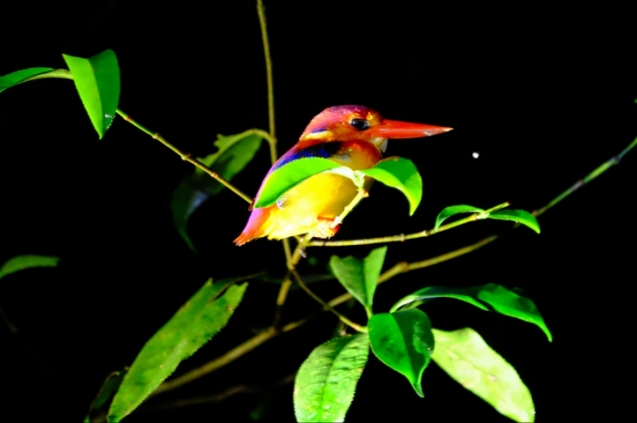 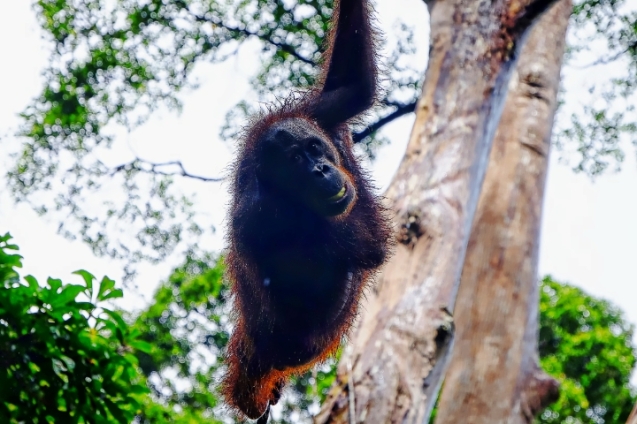 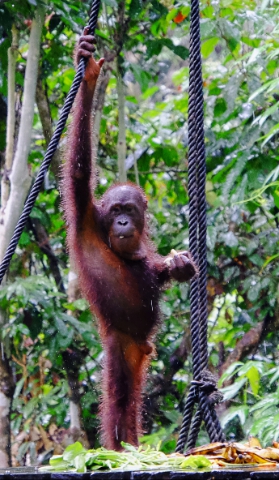 28 thoughts on “Borneo! Jungle and wildlife in Sabah”