I tried earplugs but those birds are loud so I was up again at 5:30 am. Oh well. We took our time to pack up and enjoy a leisurely breakfast of bacon, eggs and beans before our 8:30 am departure.

Today’s views were less scenic with lots of scrub brush and massive boulders. Still in Lompopo province we crossed the tropic of Capricorn. Views became mountains with different vegetation including mountain aloe, a widely used medicine plant. We passed through a series of tunnels and into flat land again.

Tshipsires Resort , just outside Musina, was a great place to spend an afternoon. At It was so hot that I did some sink laundry and didn’t bother to wring it out much and it still dried in a couple of hours. We spent a couple of hours in the hot springs pool swimming and chatting with locals and then went on a walk up a mountain. At around 5 pm, it was still hot so comfortable to walk wet. Mongoose and monkeys were playing around every where. Some people ran into baboons which are kind of scary.

Florence outdid herself again with dinner of fish, fried potatoes and greek salad.

When we found out the next morning’s departure was to be 4:30 am, Sue and I decided to skip the tent and just sleep under the stars. The others decided that was a great idea and joined us. It ended up no one pitched their tent.

Hugging Africa’s biggest and oldest baobob tree which is about 3,000 years old

Florence’s alarm went off at 3 am. After packing up the sleeping bag, mat, pillow, we had a bit of breakfast and a coffee and were ready to leave by 4:15 am.

The border was interesting.. The guy who did my exit stamp must not have had his coffee as he had the wrong date so I went back and got another one, hoping it doesn’t cause me trouble later. We got back in the truck, crossed the Lompopo River and lined up to pay for the Zimbabwe visa. Later I found out they write down the serial number of EVERY bill and I gave them 15 ONES. Oops. I thought it was important to have correct change. So, we waited about 2 hours to process all 13 passports. Then we got back in the truck to wait in line again.

3 hours of incredibly bumpy road past villages, slowing for cows and waving at locals brought us to the great Zimbabwe ruins. My pedometre registered steps as if I was walking. That’s how rough the ride was!

None of us felt like walking as we were all tired, grumpy and VERY hot. Our guide met us and walked us up the 400 metre climb up jagged, uneven stone steps between walls and over roots. He stopped at various places to explain the ruins and explain some history of Zimbabwe. By the time we reached the top our tiredness was gone and we were fascinated despite being soaked with sweat.

Just a few minutes down the road we arrived at our campsite and settled in with the whole tent routine. I was on kitchen duty and helped Florence make dinner. Spaghetti and salad. YUM.

I finally got a nice cool shower after dinner which I don’t remember ever enjoying so much. Sue and I were in the tent by 8 pm thinking it was way too early but we were SO tired and still hot. 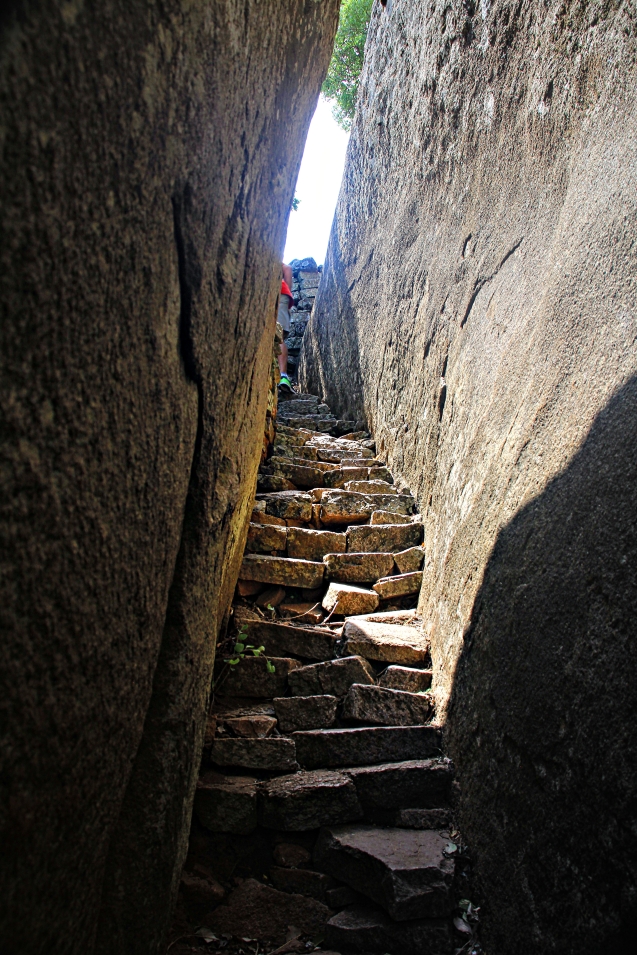 Those are some steps 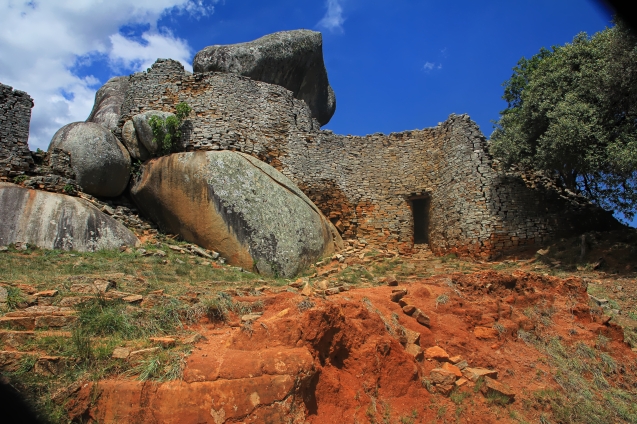 Check out the size of those rocks!

View from the top

View from the top 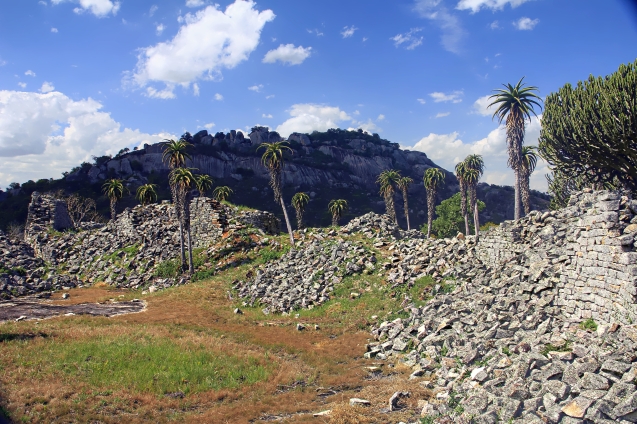 Outer wall of the women’s quarters.

Grain bin that was never used to store grain?

View from the bottom