Marrakesh.  Wow. We arrived exhausted so it was nice to have very short lines and no intense security to deal with. Our transport met us and took us to our riad in the heart of the medina in Marrakesh. Walking from our drop off was like being in a maze. We tried to get our bearings to figure out how to get back out but…..:)

Our host ordered dinner for us of Tajine, pastila and couscous which we shared. It was a great introduction to the aromas and delicious spices of Moroccan food.

After a great night’s sleep and breakfast of sweet mint tea, croissant, boiled egg, cheese, fresh orange juice and lots of bread we set out to discover the medina. Overly friendly locals pointed us in several directions and one convinced us to follow him to the tanneries as it’s  “special day”. That was the first of the many scams for money. We told him several times we had none as we were on the way to the ATM when he insisted we follow him. After seeing the smelly tannery, a nice leather shop and apothecary the request for money came. He got quite angry when he realised we SERIOUSLY had no money. Lesson learned. It happened a couple more times but we just shrugged and walked away as we TOLD them, NO MONEY!

We wandered around lost for quite some time until I asked a couple of tourists who looked like they knew where they were going for directions to the square. They were going there so we followed them.  They didn’t even ask for money! lol

Apparently there are about 9,500 souks or stalls in the medina. It’s a maze with narrow streets that accommodate, cars, taxis, donkeys, carts, motorcycles….you name it. There’s really nowhere to walk that’s safe. You just have to be constantly aware. The streets are remarkably clean considering all the traffic, garbage, donkey and horse poop.

Sue and Anita were grabbed by a lady who did a pretty henna tattoo on their arms despite telling her several times we had no money. Again, she was pretty irate to find out they were serious.

We made our way back to our room without getting terribly lost. A child helped us find our room in the maze of back streets and even unlocked the door for me when I seemed to be lock challenged. Of course I had to pay him.

The medina at night is completely different again. All kinds of food stalls appeared. Our host had recommended #14 but we were accosted by everyone and his brother to come and eat at theirs. It got to be overwhelming.  After enjoying our calamari, fish, bread and dips the waiter asked if we were finished and gave the leftovers to a woman standing there, obviously waiting for scraps. Wow. We all wished we hadn’t tried so hard to finish it.

We wandered some more and could now tell all the harassers that we’d already eaten. A few insisted we were too skinny and could eat again. HAhahaha. We watched a man with a giant vacuum cleaning up garbage and various other folks constantly watering and washing the cobble stone floor.

What do you think?

Poufs for sale…among other things.

Creating beautiful leather pieces, one at a time. 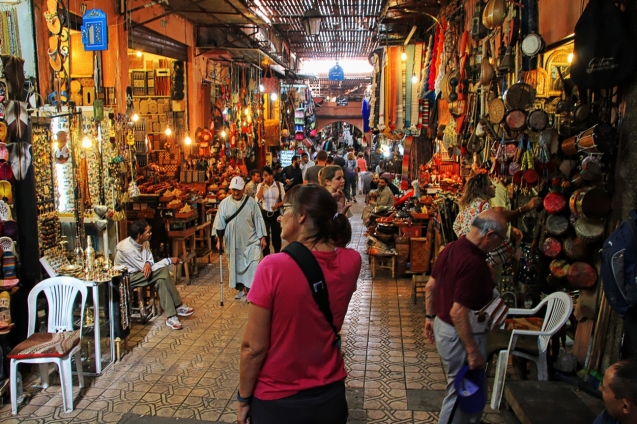 Never a dull moment in the medina in Marrakesh

Nuts and dried fruit anyone?

At the end of the tour with G Adventures we spent a couple of days in Marrakesh again. That post can be found HERE

One thought on “Morocco here we come!”