Hamid, our host at the Riad Ben Saleh (Marrakesh)purchased train tickets for us and ordered a taxi. Wow. We spent the morning talking to other guests and enjoying coffee at a cafe before boarding the train for Casablanca. Compartments each have 8 seats and for a while we just looked out the windows at the view and did some reading. Eventually I struck up a conversation with the lady beside me who, although she said her English was poor, did VERY well. She taught us a bit of French and pointed out things of interest on the journey like olive trees, the name of a river, city names, etc. They weren’t announcing stops so she told us when to get off. VERY helpful!

The Moroccan house hotel is much fancier than our riad but not NEARLY as friendly OR helpful. I asked him about a tour of Casablanca and Rabat so he called someone and handed me the phone. The price was exorbitant so we opted to do our usual “get lost in the city” tour. After settling in we got a map (for a fee, whereas Hamid gave us a Marrakesh map free) asked the porter which direction to turn outside the hotel. He was very helpful.

Casablanca is a busy, smelly city with a LOT of traffic. At one point we must have looked lost as a lady stopped and asked if she could help us find something so we asked her about a nice place to eat. Another kind local. And they say Moroccans aren’t friendly? We’ve managed to find several!

Sunday, Oct 30. We certainly got lost today. In fact we got lost a few times. The last time we had absolutely no idea where we were so when we stumbled upon an ice cream shop we decided it was time to sit down and enjoy a cone. Of course it was crowded and a young couple sat down beside us. Sue asked if he spoke English and it went from there. Next thing we knew, he left his ice cream on the table and went to ask someone else where we were and how to get to the ocean. We figured if we got there we could figure out the rest. Such a nice young man! 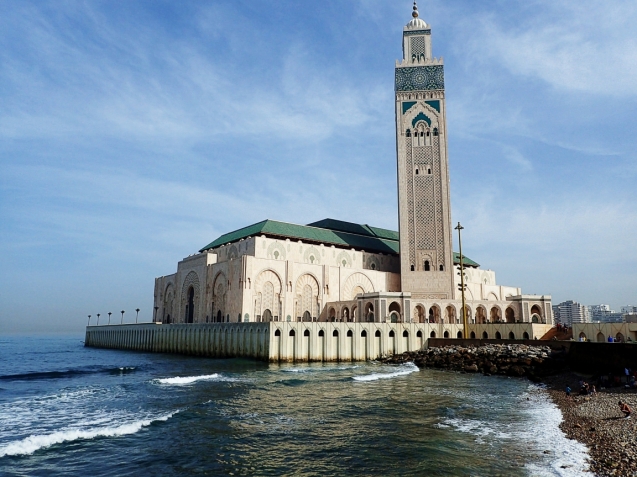 View of the Hassan 2 Mosque from the back

Hassan 2 mosque holds 2,500 worshippers inside and 8,000 in the outer area. That’s Anita in the door way. It shows how massive it is.

The darker side of Casablanca

One thought on “Casablanca. That is all.”