Previous post:  The painted hills, worst of the outback and Coober Pedy

Playing silly games to alleviate boredom on the road. You get points when a bug hits your target.

Dingo drove while the bus slept. Well, some did Jess and I kept Dingo amused chatting and playing silly games. We stopped for a sunrise, breakfast on the road and Mount Connor (otherwise known as Fooluru). The vegetation again changed along the way, becoming greener and more treed with an odd looking tree called desert oak.

After checking into the campground we went for a swim, caroused for a bit and then headed off to the rock. I thought of bringing my poncho on the walk but it never rains on Uluru so left it in the bus. We set off on the 7 km walk, enjoying the view when I noted the top of the rock was steaming. Isn’t that cool? Uh oh. Then the rain came. I tried to protect my camera but was wearing a bathing suit top which isn’t much protection. What a sight!!! Rain on Uluru is SO rare and here we were … RIGHT THERE!! It poured for about 10 minutes and waterfalls appeared EVERYWHERE. Then, as quickly as it started, it stopped and the waterfalls dried up. We were soaked but oh so excited.

Back at the bus Dingo asked “DO YOU HAVE ANY IDEA HOW LUCKY YOU ARE???!” He’s been here many times and has never seen that.

My camera is still taking photos but the menu is doing funny things and the down button the dial doesn’t work at all. I”m hoping the electronics dry out and it’s fine.

Next we headed out to the vantage point to watch the sunset. It wasn’t very colourful but we got lots of silly photos, had some crackers and dip and carried on back to the campsite where we started dinner. Dingo barbecued chicken, pork and kangaroo steak. I was exhausted but determined to get on the internet even though was 9 pm by the time we ate and have another early morning tomorrow.

Feb 14. Apparently it’s Friday. A skype call home meant I hit the sack late and was beyond exhausted so sleep didn’t come easily. Then someone decided to open their zippers and have a chat in Chinese in the middle of the night and someone else’s alarm went off at 3 am. I finally gave up at 4 am and did internet stuff. You can sleep when you’re dead, right?

After watching the sun come up over Uluru, we headed to Kata Tjura for today’s hike which was quite a bit more strenuous than yesterdays. Again I challenged my fear of heights. Yay. The views were gorgeous though with unheard of greenery for this part of the country. Again, we’re incredibly lucky! Dingo told us more Aboriginal stories and history of Australia. He keeps it even more interesting by throwing in the odd story of his own, which are …. highly unlikely 😀

Back at the camp for lunch most opted for a rest rather than a swim. I thought of going swimming but decided instead to catch up on internet stuff. After all, I paid for it. Better use it 🙂

On the bus and back to the Rock. Ayer’s Rock or Uluru (Aboriginal name) is the biggest monolith in the world and is even more impressive now that I understand what that means. For the 10 years leading up to 2010 the area endured a serious drought and there was very little vegetation that survived. Over the last 3 years it’s been better but still gets very little rain. It might happen 5 or 6 times a year and yet today again we happened to be there when it poured. EVERY one we met was excited about it. Dingo took us to a few different sites and told us aboriginal stories about each. He’s a great story teller with a passion for preserving native culture. He explained the significance of the rock to the aboriginals and why climbing the rock is offensive to their culture. The hike at Kata Tjura is more impressive but the history and significance of Uluru is fascinating.

Again we travelled to the sunset viewing area and set up a table with cheese, crackers, dip and ….champagne. As the sun went down the colours got brighter and brighter till we were blessed with one that would rival sunsets we have at home on Rice Lake. The full moon, glowing Uluru and sunset was AMAZING and again we were blessed.

A bunch of goofs and Uluru

Dingo made us a delicious Thai chicken and rice dish for Valentines day which we enjoyed as the only people left at the site. We were sitting around in a circle playing a silly game when we saw Dingo and Andy emerge from the bus looking …. odd. They were completely naked other than a string of heart shaped lights and a g-string underwear that looked like an elephant,  and they were carrying chocolate roses which they handed out to the all the girls. I laughed so hard it hurt. The two of them hammed it up and pranced around and we took lots of photos.

We packed everything up and got back on the bus where Dingo carried it on with “appropriate” music played really loud, lights flashing and about as much dancing as you can do from a bus seat. Once in the campground he drove the bus round the traffic circle till we were dizzy. He parked the bus, jumped from his seat and did a stripped dance up and down the bus to “I’m too Sexy”. Again, so much laughter that I hurt and I know I wasn’t the only one.

Next thing you know he’s back in the driver’s seat with his serious face talking about what’s happening tomorrow. Zoe hollered that she had a hard time taking him seriously after that “display”. Yup. I don’t know how he does it. He seems to have endless energy, creativity and knows how to have fun.

Sue and I dragged our swags way back into the field as it doesn’t look like rain and put in the ear plugs. I NEED some sleep. 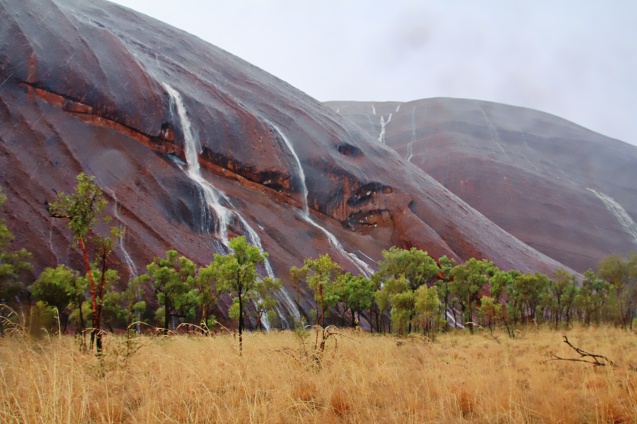 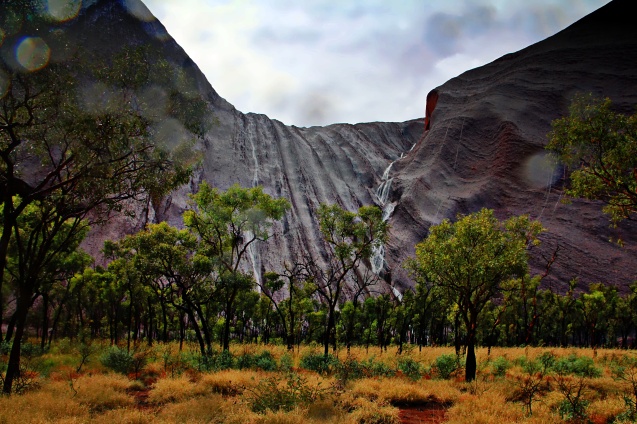 Rain has stopped and the water falls are slowing down