Today’s adventure was a tour into the Drakensburg mountains and the Kingdom of Lesotho. 8 of us piled into a land rover and headed into the mountains. Matt gave us a LOT of information about the region’s flora, fauna, culture and history as we drove up, up and up the mountains. There were a few stops along the way, one at water fall rumoured to be the fountain of youth which of course I tried. It can’t hurt!

We exited South Africa and entered Lesotho which is 70% mountains, is about the size of Belgium and only has a population of 1.5 million people and at least that many merino sheep and angora goats. We did a short hike to the highest point at 3,420 metres above sea level. Yep. I found myself hiking at altitude AGAIN, even though I said I wouldn’t.  I regretted the loss of my jackets and by this point was wearing 4 t-shirts and a long sleeved shirt.

I learned a LOT about Lesotho and enjoyed many interesting conversations about how, and IF, we should help the poor. The discussions on South Africa politics were interesting as well. It’s always enlightening to hear how citizens view their own country’s issues. We noted that in the western world’s effort to “help” those less fortunate, we’ve created a begging type attitude. Many believe we’ve got lots of money and that it’s easy to get. After all, we can travel far away and many people just “throw” money at them. They don’t differentiate between those who stay at luxury resorts and those of us who backpack. We’ve ALL got more money than they do. One also made a point that there is nothing wrong with the way they live. What makes our lifestyle “better” than theirs? We also tend to believe that others WANT a lifestyle like ours. Lots of philosophical discussions happen on these trips!

After stopping for a nice, warm mulled wine at the highest pub in Africa, we headed back down the mountain, stopping occasionally in the rain to take a photo when there was a break in the clouds.

Dinner at the hostel was enjoyed later with the nice company of a young Australian couple and a woman from the Netherlands. Our

Armed with maps and a KZN nature conservation pass we set off to hike the in the Drakensberg mountains. We chose a 2-3 hike as we have a tendency to get lost so figured it would be more like 4 or 5.. Simone told us it was an easy hike and if we got lost on this one, we shouldn’t be hiking. Uh oh.

It started off nice. We crossed a lovely stream and sauntered through a cool, damp forest then out onto a nice grassy plain. Then we went up. It was okay at first but got tougher. 45 minutes of straight up. No guardrails, ropes, trees, or anything to hold on to and cliff right beside the path most of the time. Next a narrow path next to a cliff and finally a plateau. At the pile of stones we reviewed the map and set off to find the yellow pool. We never found the path intersection mentioned on the map and, despite walking for another hour or so, never found the yellow pool. Maybe it dried up.

The climb back down the mountain was a little easier than the upward route but my toes didn’t like it much. At the bottom we were met with a barbed wire fence. After walking along it for a bit, Sue hollered at a fellow on the road and asked if he knew where there was a hole. He pointed back in the direction we’d come from. Typical.

Across the road we entered reception at the Sani Pass Hotel (where people with more money than us stay) and asked if we could walk to the water fall. A nice young man showed us where to go and we walked some more. We sat for a bit in the shade, drank my apple juice and watched the thundering cascade, then headed back to the hostel. On the way we saw a troop of baboons cross the road. They’re pretty amusing to watch.

Hot, sticky, and really tired of shoes, we got our swim suits on and jumped into the VERY refreshing pool. THAT felt awesome!

By that time it was 4 pm and we were starving so we went to the cafe and enjoyed some smoked trout and a salad; enough to take the edge off the hunger but not spoil us for 6:30 pm dinner which we couldn’t miss as they were having chocolate cake for dessert. 😀

We grabbed our books and I put the zoom lens on the camera to take photos of the beautiful birds I’d seen while swimming. I got photos but we never opened the books. Chatting with other travellers is way more fun.

Again, we enjoyed dinner with new friends where we all shared what we’d done that day. 5 hours of hiking and 24,000 steps. Not bad. The only people we saw on the hike were some workers who went past us. No other hikers around. Just Sue and I and the mountains. Beautiful!

After a 2 hour morning hike we got out the books and spent a couple of hours chilling by the pool; me in the sun and Sue in the shade. I jumped in the pool a few times, walked around with the camera trying to capture the beautiful birds and even read a bit.

Even though we tried to convince the shuttle driver the bus would be late, he insisted on leaving at 2:30 pm. We dawdled but still left by 3 pm. ON the way he stopped so we could take pictures of a dead cow being demolished by cape vultures and we still arrived way too early. At 4:30 pm we were in Wimpy’s waiting for the bus which, as predicted, was late. At least we got to catch up on some internet and eat dinner before the bus finally arrived at 7:30pm

Out post on the way to Lesotho where trade still happens. 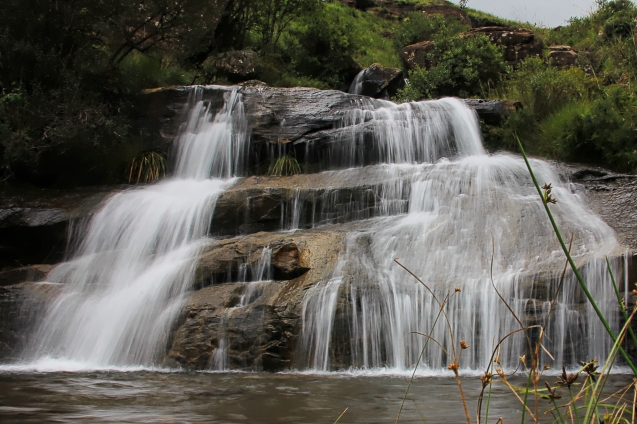 Going up the Sani pass

View on the road up to Lesotho 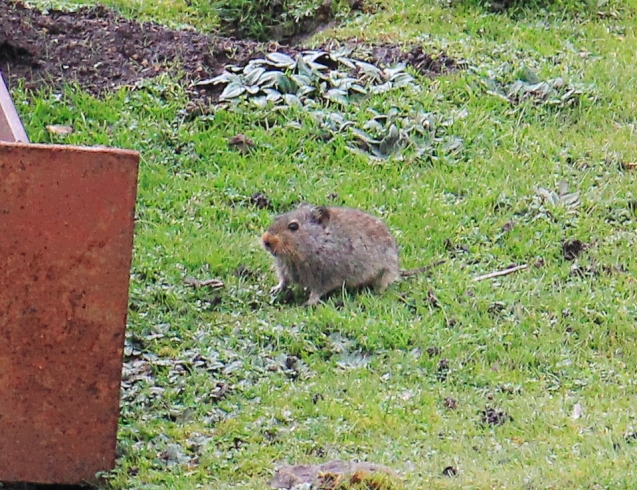 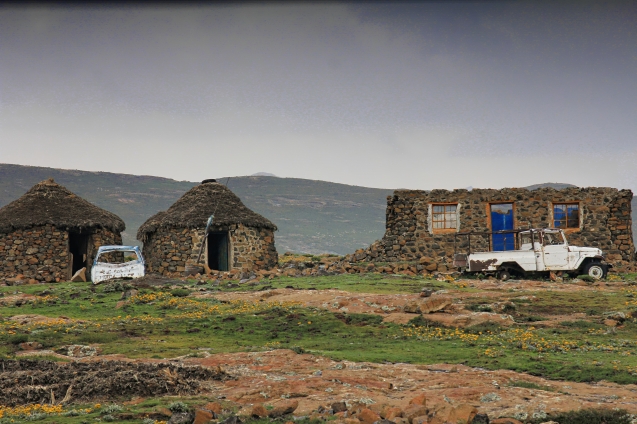 Temporary home for shepherds with coral for sheep when they’re far from home. 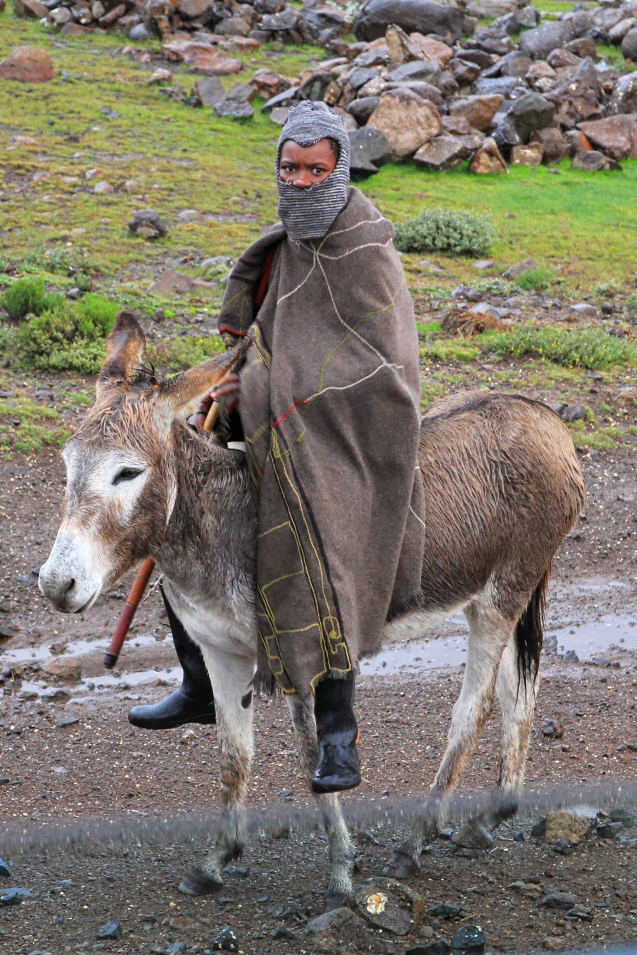 View from the highest point in Lesotho

Jumping for joy at the highest point in Lesotho. 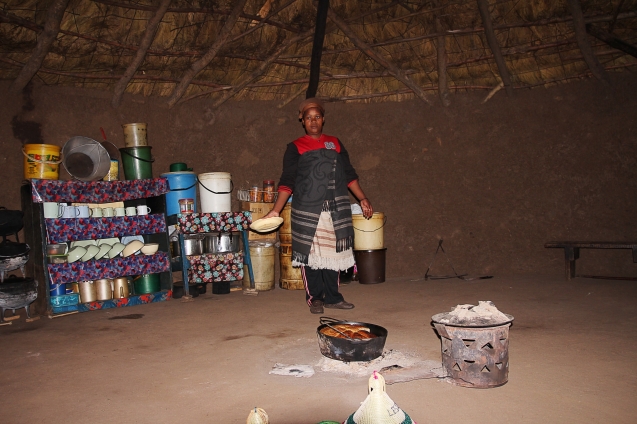 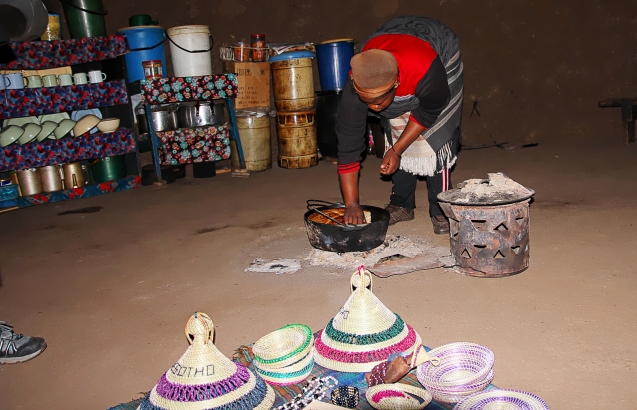 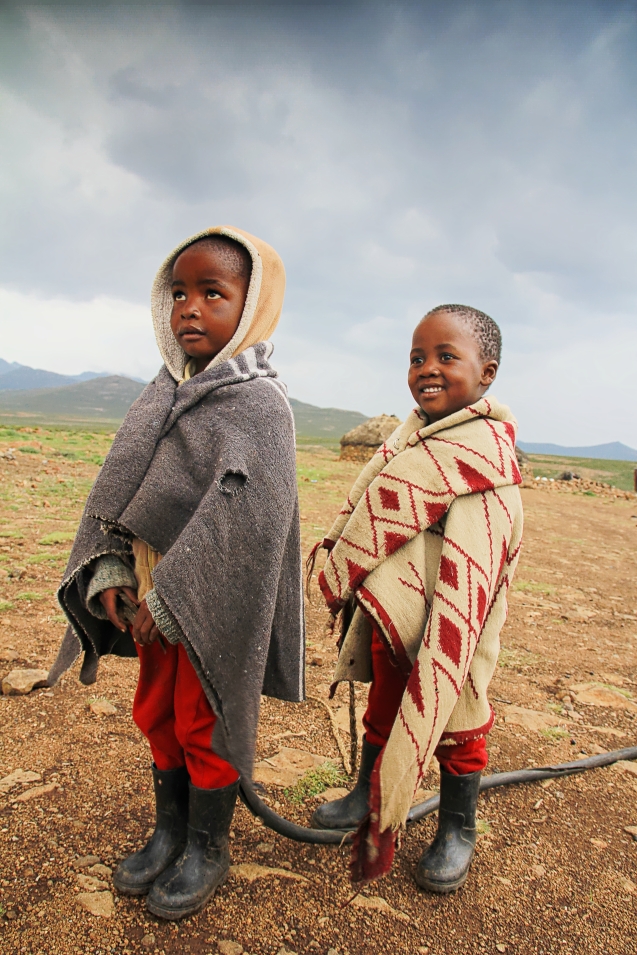 Even the little ones wear wool blankets.

Tough walk up here but the view was worth it

Africa boasts some of the most beautiful bugs!

One thought on “Sani Pass to Lesotho, like stepping back in time.”