Apparently it’s the weekend again. We never know what day of the week it is.

We checked into the Mantis and Moon in Umzumbe where they’d “upgraded” us for one night as someone else was in my bed. It was nice, but we had to share a bed and it’s a pain to move rooms. The outdoor bathroom was lovely.

There was wifi but it was really slow and we tried to get somethings done over breakfast. It was a lesson in frustration so I finally phoned Louise at Detour Africa. Eventually we booked our Pilanesberg trip over the phone.

Since we had a couple hours to kill, we wandered around, checking out the hostel which was very interesting. It’s set in a jungle, with a teepee, tree houses and wooden paths everywhere. Then we headed off to the beach for a good walk.

The weather was kind of icky but we managed to get in a 2 or 3 hour beach walk. For lunch we headed to the Rock cafe as they were having a woman sing Irish songs which sounded nice. We met some others from the hostel and had a coffee with them while waiting for our food. Calamari of course 😉

Back at the hostel we just hung around, chatted with other travellers, did a bit of (VERY SLOW) wifi and joined others for pasta dinner. It was edible.

I’m really getting tired of places that advertise things they don’t have. The last few places have claimed they had wifi. One no longer has it and the other said they were out of data. Interesting. This place claims speedy wifi. I can’t even open a picture. We’re supposed to be able to get breakfast but they ran out of yogurt yesterday. We told them. The guy went shopping last night. This morning, still no yogurt. I heard them tell new check ins they can get breakfast. Sure, if you like dry cereal. When I asked where else to go, she said there’s a place 7 km down the road. I don’t know how many times we have to tell them we have no car.  Never mind the fact that EVERYone says it’s not safe for two white women to walk. Sheesh.

It also advertises hiking nearby. Right. A half hour DRIVE away! We have to pay a tour guide to take us on a hike. No thanks. Oh well. I guess the life of a traveller can’t all be sunshine and roses. We handed in our laundry. Hopefully they don’t lose or ruin our clothes.

We spent the morning walking and getting lost and finding an abandoned monastery on a hill.  Again, apparently not safe for us to walk but we took our chances and didn’t get mugged. By then the dry bran flakes were long through our system and we were dying for food so off we walked to the Rock where we thoroughly enjoyed a burger. We asked the lady there how to get to Spar. When we told her we were walking she said “oh, that’s FAR too dangerous for 2 ladies Wait a minute and this man will drive you”. Nice! He needed a few things and we got stuff for breakfast. Since they’d been so kind we decided to go back for dinner rather than cook our own. We didn’t find out his name but he’s an older man from a staunch apartheid family who married a black woman. Interesting!!

We’d seen monkeys playing around in the jungle but this afternoon they decided to have a party on the roof of our room. I don’t know what they were throwing but it made a racket. The rain picked up and we decided to spend the rest of the day reading.

It rained like crazy all night and finally started to clear shortly after 9 am so we grabbed the opportunity and went on a walk on the beach. Later we went back to the Rock for some “lupper” of calamari and real fried potatoes. My greek salad had beets, carrots, radishes, mushrooms….weirdest greek salad I ever ate but it was good.

Back at the hostel it started raining again so we spent the rest of the day chatting with travellers and reading. Turns out we aren’t the only ones less than impressed with this place. Others were told they could have breakfast but there was no food. There are 3 big dogs that seem to be quite useless and smell bad. They’re allowed everywhere, including the furniture so we’ll only sit on the kitchen chairs. A couple of ladies had a rat in their room. Staff tried to tell her it was a mouse but she said it was the biggest rat she’d ever seen. Aren’t dogs supposed to take care of critters like that?

We’re glad to be leaving but haven’t heard great things about Durban so we’ll see. 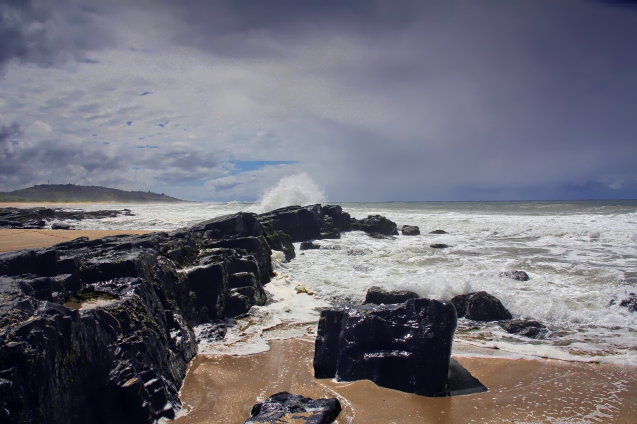 Inisde the house on the monastery grounds 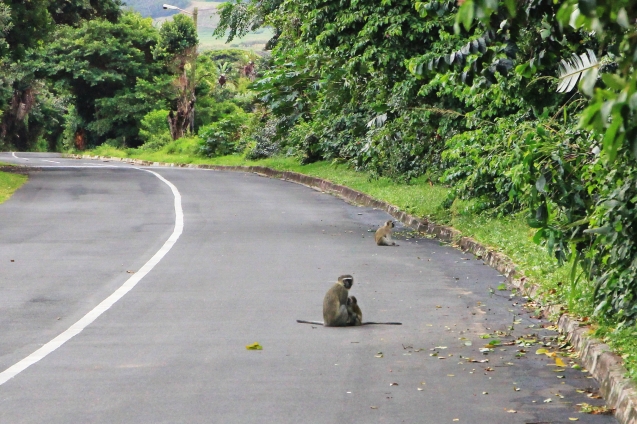 crabs playing on the beach