Jessely picked us up and left us at the bus stop with instructions as to which one to take. There’s no such thing as schedules here. Buses come when they make it. We’d been waiting a while and were joined by other travellers. A van pulled up and asked “Oslob? Liloan?” Hmmm. I asked how much? “200 pesos”. Will you bring us to the ferry terminal? “Sure” Some of the others were going to Oslob. We all just looked at each other and shrugged. Why not? The bus would be cheaper by maybe 70 pesos but it wasn’t here and the van was. So we all jumped in. An hour or so later he dropped us off at the ferry terminal (saved us a tricycle ride too!) in time for the 1 pm fast ferry. There we were met by the usual horde of tricycle drivers, chose one and headed for Dumaguete.

We were told it’s a nice city. I guess it is compared to a few other Philippine cities but it’s still icky. We’re glad we chose to just stay the night after spending the rest of the afternoon walking around and checking it out. Watching some young men catch a bunch of eels and put them in a pail was interesting. None of them wanted to touch the things so I’m assuming their bite hurts.

There’s not many breakfast options in Dumaguete so we went to McDonalds. At least they’ve got good coffee! We pulled out the backpack straps and headed for the ferry terminal where we purchased tickets, paid the terminal fee and waited. Yes, the ferry was cheap (130 pesos for 1.5 hour trip) but we were packed in there like sardines. It wasn’t the most pleasant trip but seeing dolphins jumping beside the boat kind of made up for it.

Tori’s Paradise turned out to be a real surprise. We got a lovely room right on the beach with our own patio, a towel AND a bathroom! The ocean was pretty rough so clarity wasn’t great but swimming was fun. At low tide we went for a walk and happened upon a family working to get the sardines out of a net the fishermen had brought back. So we helped. One man grabbed a fish and just ATE it! Ewww! I asked one of the girls if she’d eat them and she said “Yes, FRESH fish!” They offered us some fish for our help but we thanked them and carried on.

On a whim we checked out the dive shop. I’ve wanted to go diving again but am a little nervous. After chatting with Junjun and then thinking over dinner, with Sue’s encouragement I decided to go for it. We met the owner whose name is Borja or something (he’s Slovenian) and we all headed to San Juan beach. It was way too rough and murky here. Junjun was very patient and did a quick review of the important stuff. Getting in and out was the hardest part. Once down the sights are such a great distraction, I forgot my anxiety and just enjoyed. We sat on the ocean floor and just watched a hawks bill turtle. I could have touched her, and she just glanced at us occasionally but basically ignored us while she ate. We saw some blue finned and unicorn surgeons, both quite rare fish as well as many other amazing creatures. I managed to stay down 45 minutes which isn’t bad considering my anxiety.

The next dive was even better. We saw another hawksbill, a cuttle fish, a white eyed moray eel and so many other beautiful fish. That dive lasted 55 minutes. I’m getting better!

Sue said the snorkeling was pretty good too and described a snake she saw to Junjun. Good thing she swam away. Apparently it’s a poisonous one.! He said not to worry though. If you don’t get between the snake and air, he’ll leave you alone. Good to know.

The next day we headed tot he Maite marine sanctuary. Siquijor now has 19 such sanctuaries. Again the visibility was great and we saw lots of interesting coral, species of fish, a huge purple puffer fish and lots of different kinds of shrimp. I stayed down 60 minutes and still had air left. I’m getting better!

One day we hired a tricycle to take us on a tour of the island. Turns out he spoke NO English so we didn’t learn much. He took us to places then just pointed and said “go” so we went. We tried a couple of times to let him know what we wanted to see but…..oh well. We saw some of the highlights and did get around the whole island.

Our last full day at Tori’s ended up being absolutely gorgeous. The sea was flat with not even a breeze to stir up waves. We were snorkeling by 7 am. We came back for breakfast and decided to walk the shore for a bit. We’d just turned around to come back when a young man came out to greet us and let us know we were in a marine sanctuary. When we told him we had no money on us he told us to go ahead and pointed out areas of interest in the water. Wow! We saw giant clams, parrot fish, all different kinds of coral, etc so we ended up being in the water close to 3 hours.

After lunch we headed back with money. He laughed and seemed really surprised that I actually fulfilled my promise to come back with money. It was a more difficult walk as the tide was high. I wanted to do my part to support the conservation efforts here on Siquijor. They’ve got 19 sanctuaries now and it’s working.

Again I spent about 5 hours in the water. Sure does make you sleep well at night! 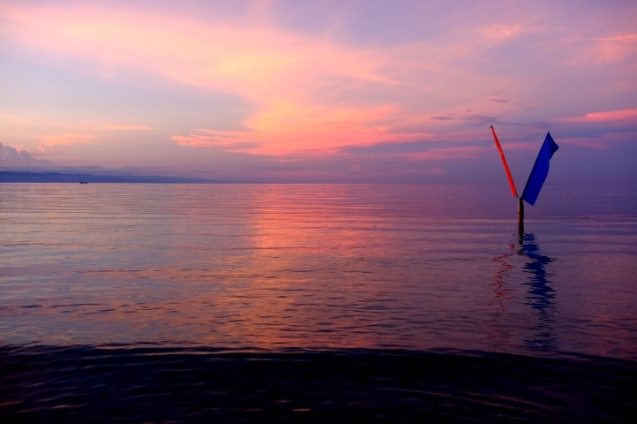 We helped these folks with their catch. Lots of laughs 😀 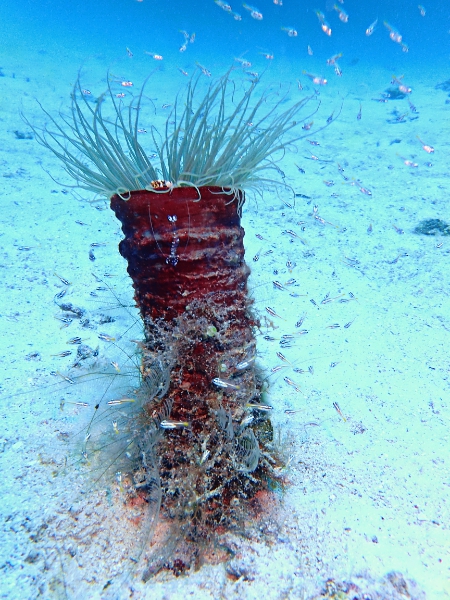 This tube has a whole ecosystem in it. Can you see the tiny crab on the top?

Fishing boat. I liked the reflection on the bottom. Shows how clear the water is! 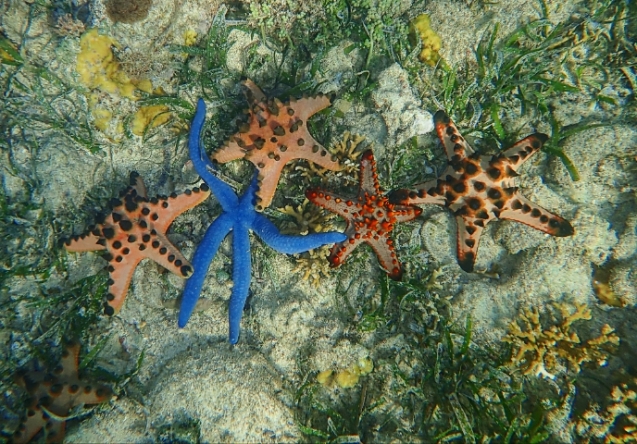 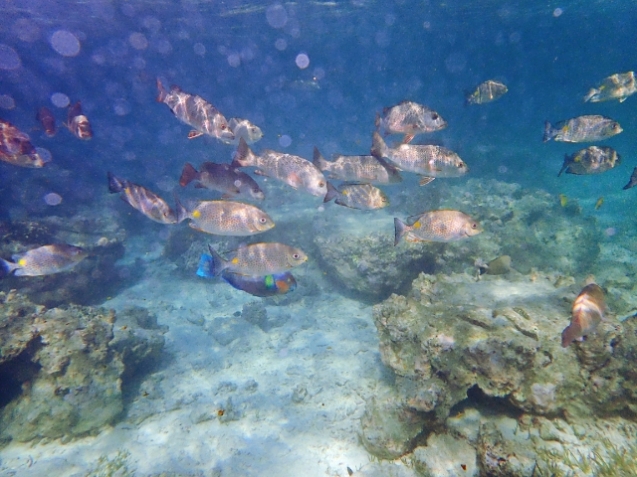 A school of jackfish with the odd parrot fish

Foot massage. I was afraid this guy was going to take a chunk out of my foot!

Balette tree (banyan). All of them have mystical properties in the Philippines 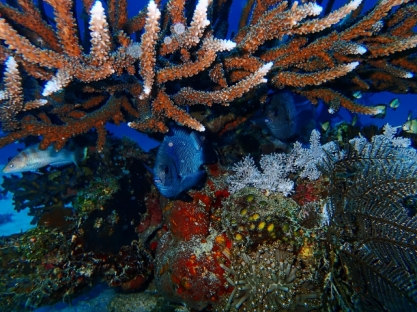 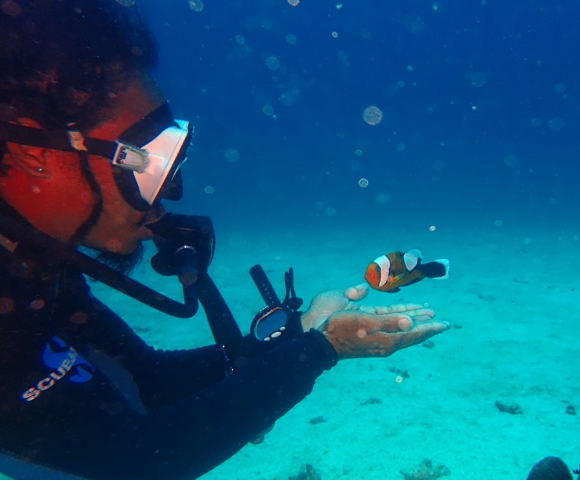 Follow Where in the world is Grandma? on WordPress.com
Join 391 other followers