Kayaking must have been hard on me as I woke up with a sore back and creaking hips. It can’t have anything to do with age?!

After the usual pack up ritual we headed South. Up and down, twisting and turning through rocky barren mountains and a constant construction zone. At a stop in Springbok, Sue and I enjoyed a REAL coffee, picked up some snacks (including monkey gland flavoured chips..interesting!) and headed back to the truck. The others weren’t ready to go yet so I went walking around the parking lot. Munya laughed at me but then joined me.A good, brisk walk helped with the aches and pains.

We crossed the Cederberg mountains and the Olifant river and the desolate terrain became miles of vineyards. Our camp for the night was in one. Highlanders is set on the side of a hill and the campsite was luxurious, cushy, green grass.

Sparky, the owner, introduced us to 7 of the wines produced here. We poured our own “samples” so many of them were a little generous. I chatted with travellers from the Intrepid truck and learned about some more places I need to visit, especially Ethiopia. I see another trip coming together 🙂

Dinner was lamb chops on the braii, fried potatoes, salad and cooked vegetables. Considering I wasn’t hnngy I sure ate a lot.

We tore down our tent named Goldfish for the last time. We had a great time together but I won’t miss it much. A real bed will be MUCH appreciated!

Heading South toward Capetown, we passed miles of orange trees, fields of roibus tea and beautiful scenery. This big truck catapulting down the mountain road, brakes squealing, terrified me but everyone else seemed calm. I did a lot of imaginary brake pumping.

After checking in to the Ashanti hostel in Capetown we were picked up by Mark, who took us on a tour of the Township of Gugulethu where we visited a family. Things are very basic in Gugulethu. They seemed to have electricity but no running water. We left some clothes we didn’t want and Sue and I gave away our sleeping bags. It lightens our load and helps someone in need.

We visited a place where they sell meat and tried sheep’s head, a delicacy eaten at ceremonies and celebrations. We visited another hut where they shared some of the beer they had made. Later we stopped for lunch at a diner type place that cooked “braii” which is barbecue. Tasty stuff.

On the way back, we dropped off a package of our leftovers and I went through some of the alleys to find some kids to give school supplies too. Those who weren’t afraid of me were really friendly and happy to share their drawings. They loved having their photos taken and wanted me to show them. I took a little too long as the others ended up waiting for me. Oops.

Later a bunch of us took taxis to the water front and enjoyed a last meal together. I’m going to miss this bunch. They were fun!

I didn’t have to set an alarm but was awake ridiculously early anyway so went for a leisurely shower at 6:30 am. Sue, Gemma and I made every effort to be quiet so the 2 other guys in the room could sleep. After breakfast we came back to find them finally awake. We ended up chatting when I told them I was impressed with their sleeping ability. They’d just done Norway and one guy had frost bite on his big toes. OW!

Sue and I donned backpacks, checked out and walked to The Backpack, supposedly a 10 minute walk. For us directionally challenged women, it became more like a half hour. THIS is why we can’t buy souvenirs yet. In spite of getting rid of stuff, they’re HEAVY to lug around.

We spent the next couple of hours trying to book things to do for the week but the websites weren’t behaving or accepting our cards. The lady at reception couldn’t give us the same prices so we decided to just try later. On the way to the waterfront we saw a travel agency and popped in, nicely 20 minutes before closing. Louise got it all arranged for us AND we got the online prices as she called and told them their site didn’t work. Awesome Louise!

We walked to the waterfront, found the Robben Island museum, booked that tour and just wandered, settled on Greek food for lunch and headed back. Since the hostel has a kitchen, we picked up some groceries and stored them in the fridge so we don’t have to eat out. LOVE that about hostels!

After a great breakfast put on by the BackPack hostel, we set out to find the hop on, hop off bus stop. It’s never as easy as they make it out to be. Twice someone offered to help us “authorize” our tickets. Sue was on the ball and spotted a scam so we didn’t.

We learned and saw a lot of Cape Town and noticed there were no clouds on Table Mountain so decided to go up the cable car. After an hour wait there were STILL no clouds so we got a beautiful view.

By the time we stopped for lunch it was 4 pm and we were starving so we got off at the Green Market area and happened on a Kurdish restaurant. You’d think we’d get Kurdish food then but nope. The special was a burger so I thought, why not? I thought of Wendy as I stuffed the bun full of deliciousness in my mouth 😀

Back at the hostel we spent the evening trying to figure out what to do with the rest of our journey. It’s just not working online so I guess we’ll get a phone. 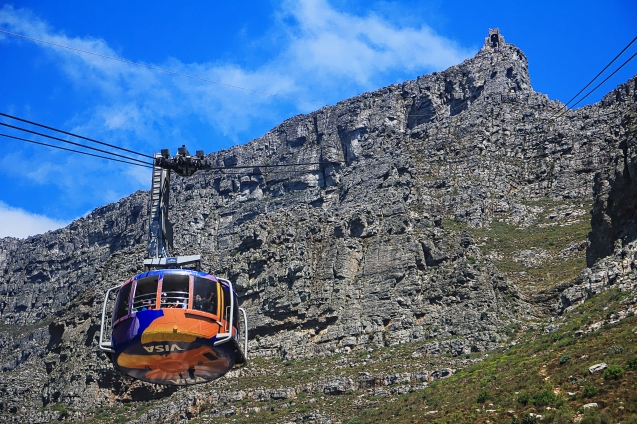 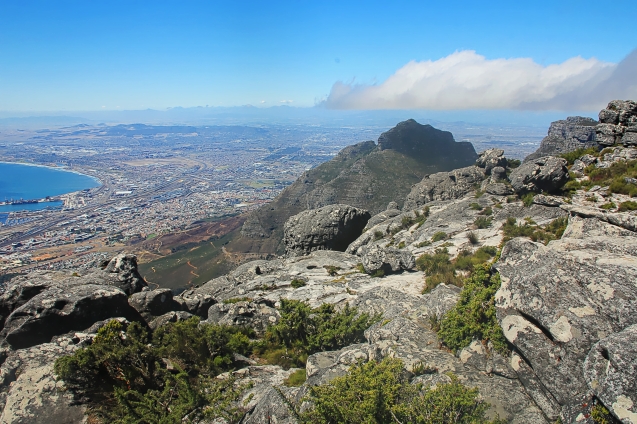 View from the top of Table Mountain 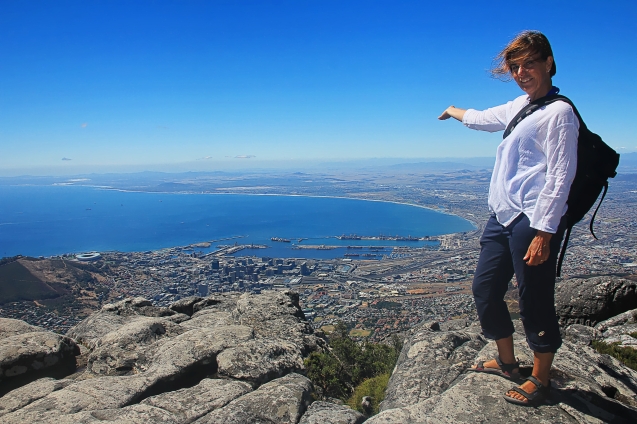 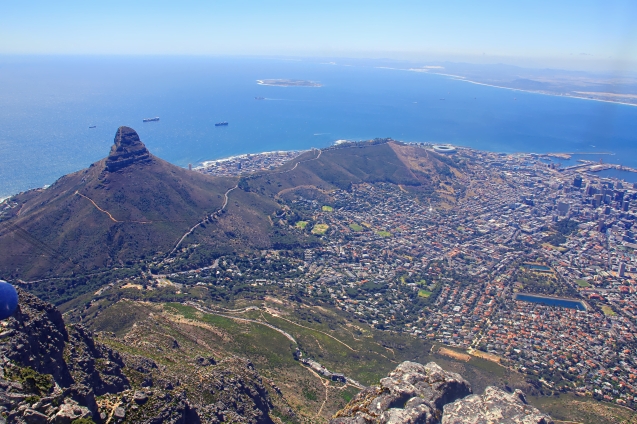 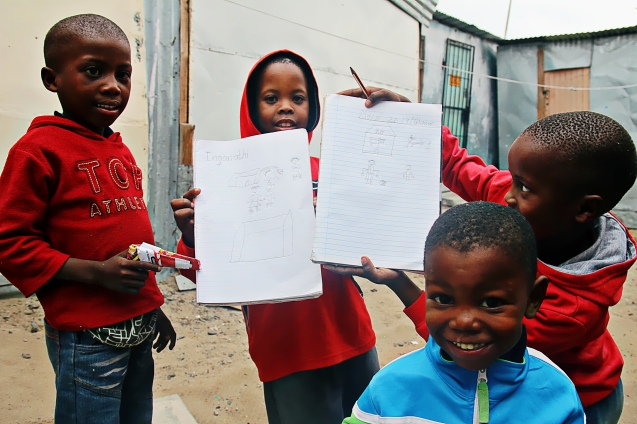 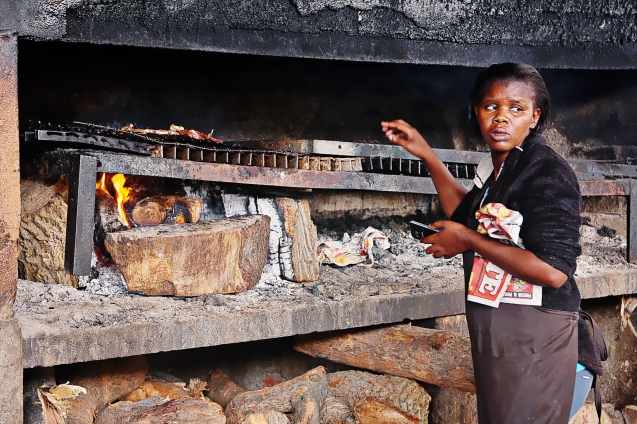 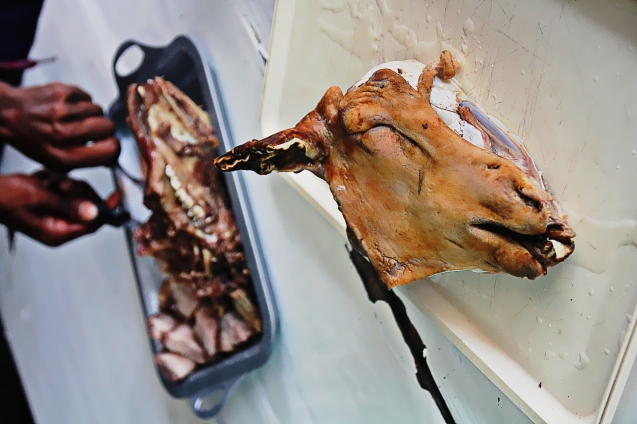 Sheep’s head anyone? It was pretty tasty. 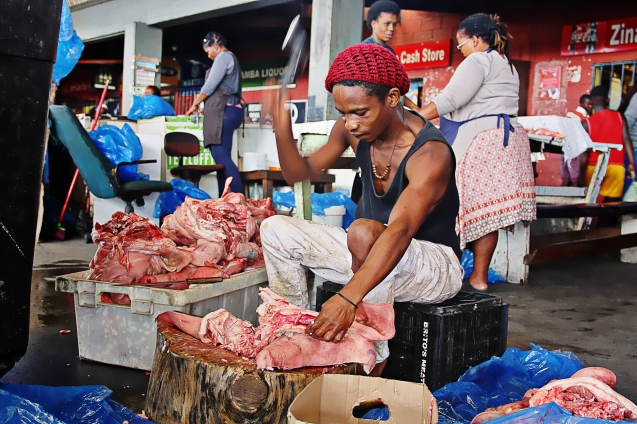 Cutting up meat with an axe 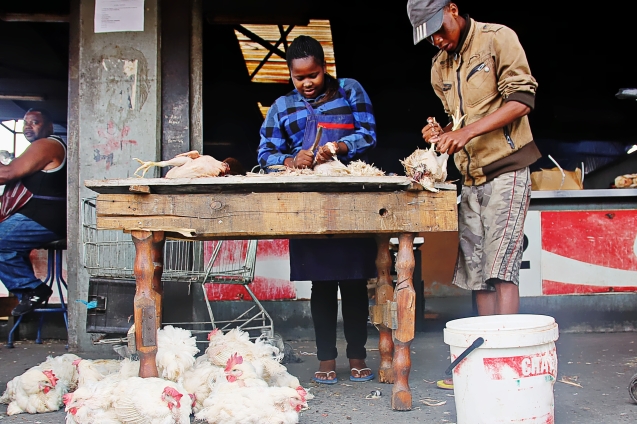 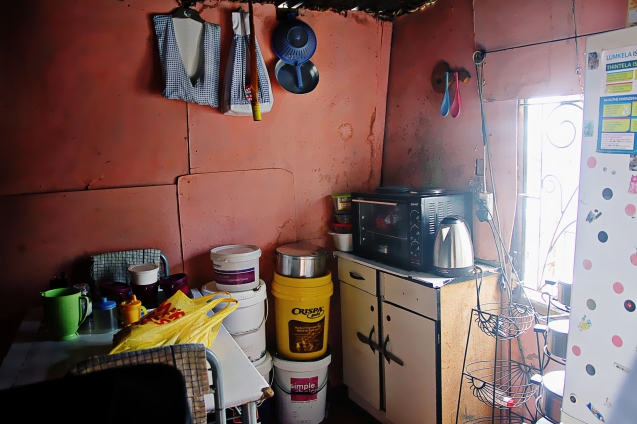 Kitchen in a hut in the Township